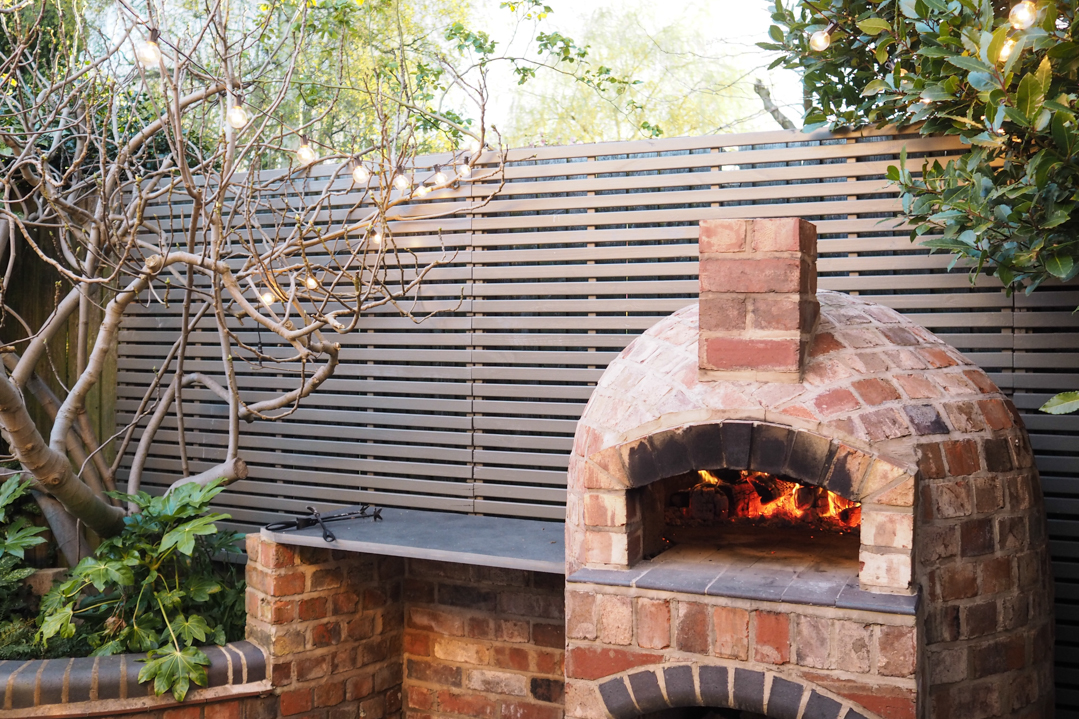 The pizza oven is possibly my most requested blog post of all time so I am excited to finally be able to share it with you.

Many years ago I visited my friend’s sister’s house for a party – they served up pizza from their very own in-garden wood fired pizza oven and it was the most fabulous thing I have come across. It was such a fun, collaborative and hands-on way to serve food to guests and I was instantly smitten!

I hoped one day I would get to have one myself and fast-forward a few years, I found the perfect opportunity.

Following our kitchen extension (you can see the before and during here and here, and finished results here) we laid a patio but didn’t do much else with it. There is a little-used space at the side return of the extension and I envisioned turning it into a cosy nook perfect for entertaining.

Key to this was our very own pizza oven! The idea of being to create the most perfect and delicious handmade pizzas that could transport you to Italy in a bite was too much for me to resist. 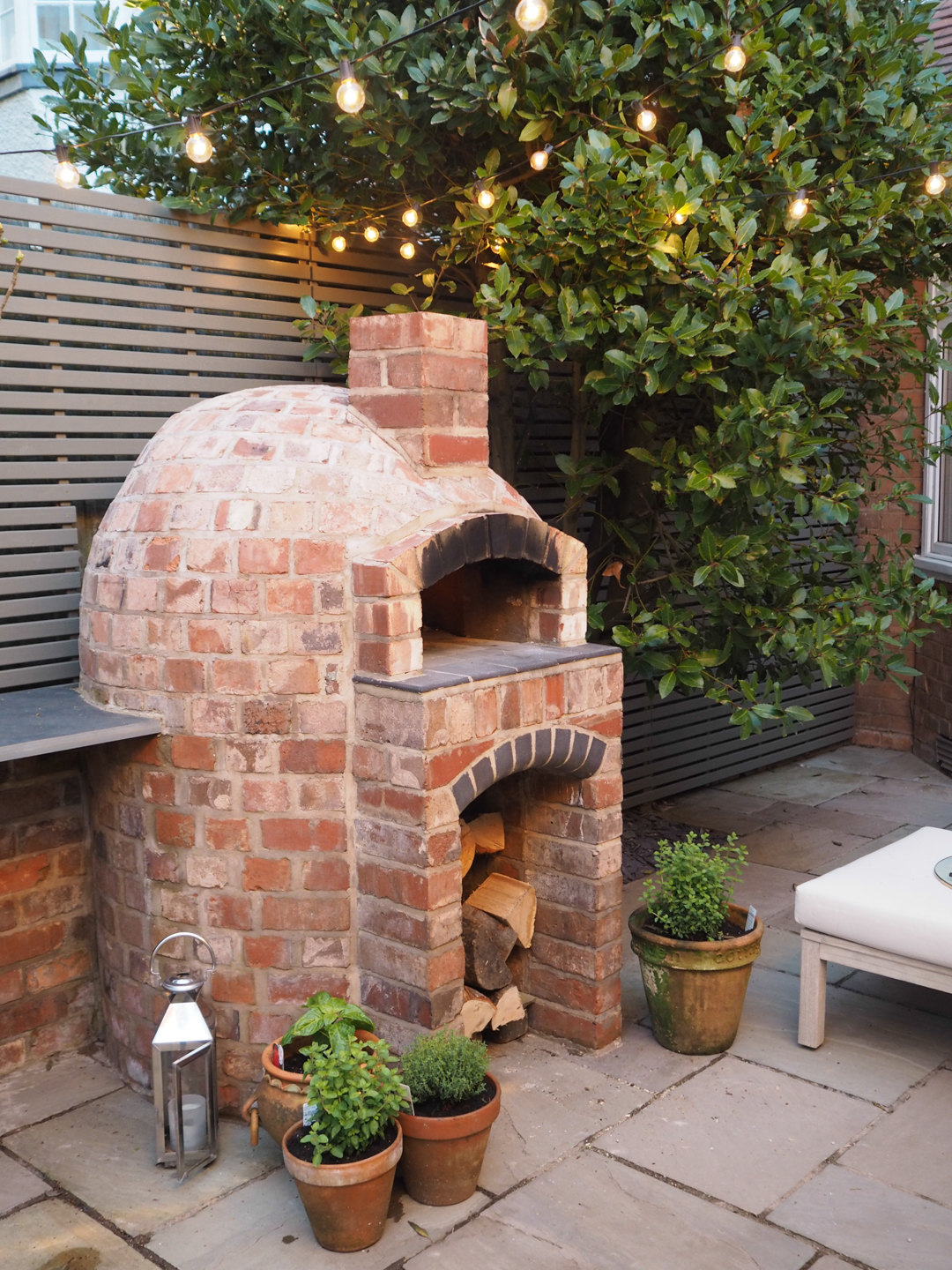 As with the majority of our projects, Will helped bring my vision to life. In fact, let me just give FULL credit to him, as he sorted out the whole shebang! I gave him an idea of what I wanted and he spent hours sourcing the ideal solution and making it happen. 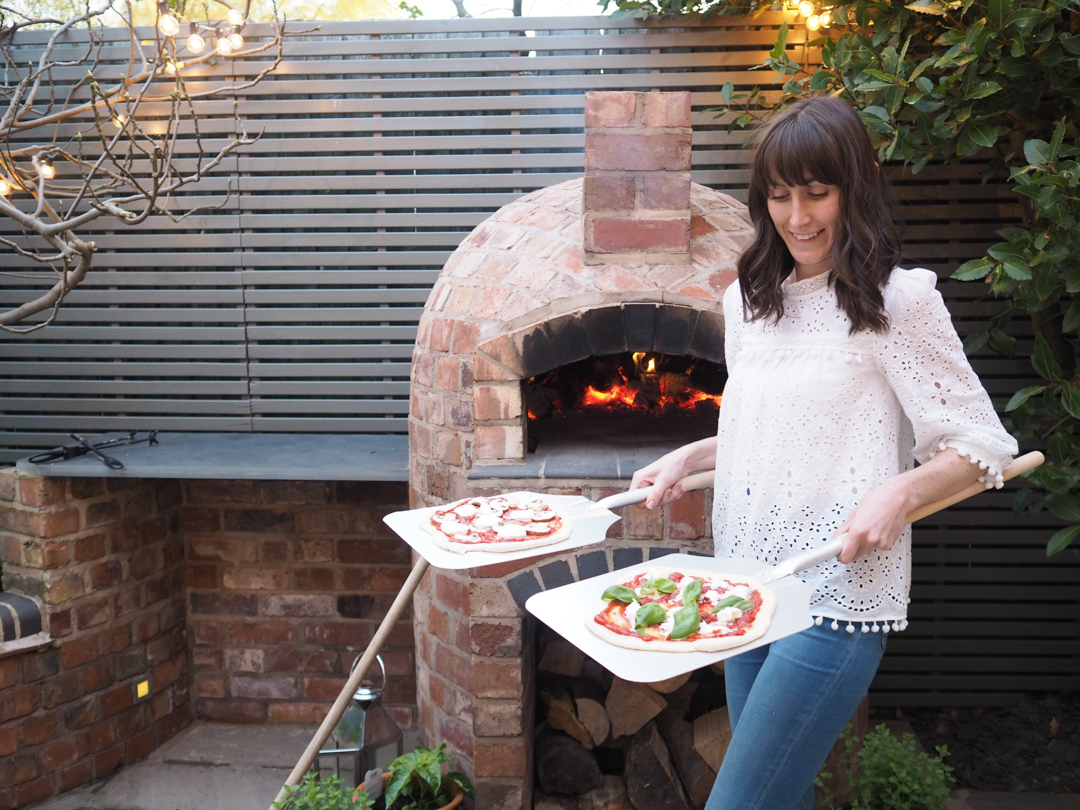 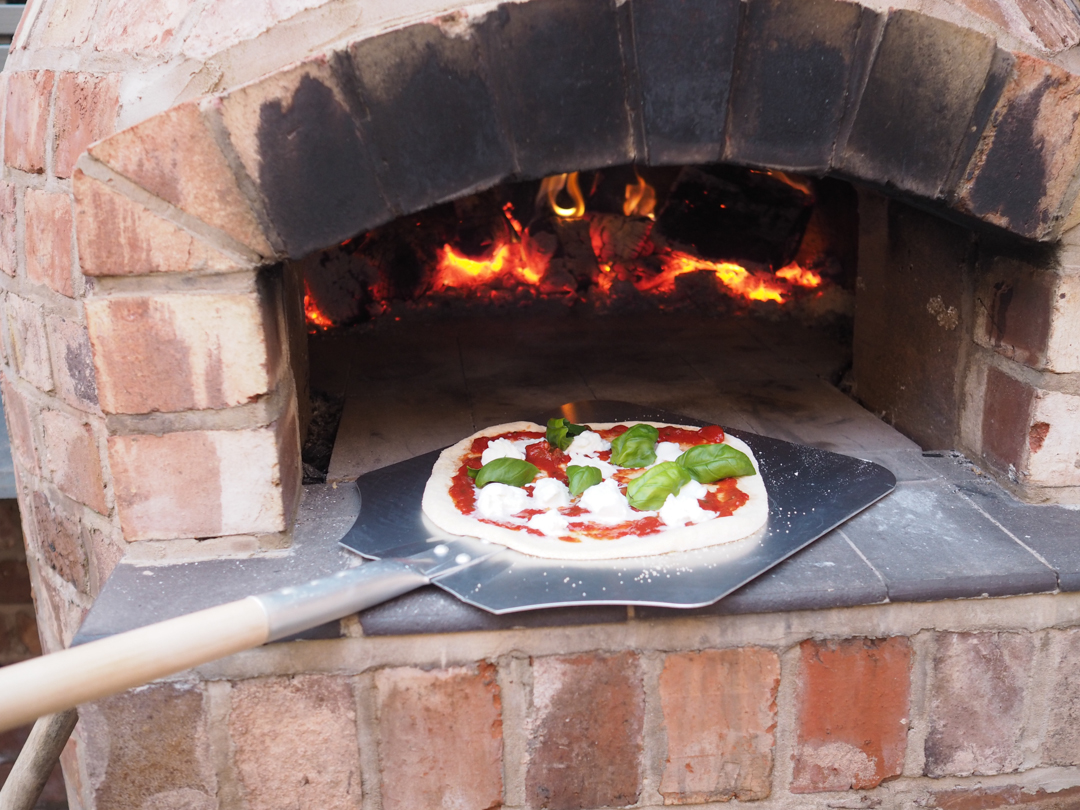 We had the ideal spot in the courtyard, that was about three metres from the patio door leading from our kitchen/dining room to the pizza oven location. That meant it was convenient and accessible if the weather was less than perfect (worth considering when living in the UK!).

We had already laid a patio when we completed the extension so we had a solid base ready on which to build from. If you are considering a wood fired pizza oven project, you’ll need to factor these two items into your plans. 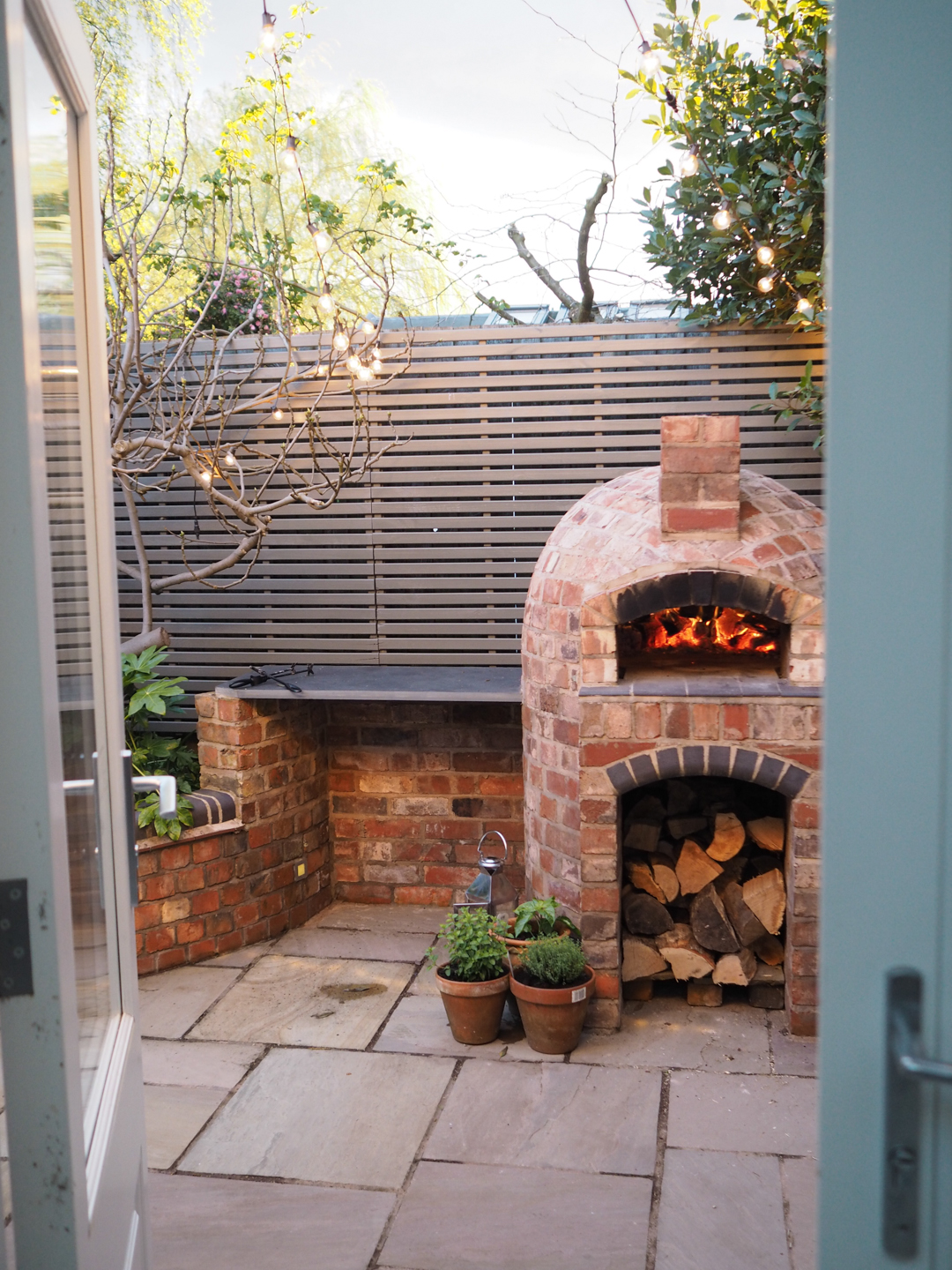 I think for the handy and practical minded, you *may* be able to find yourself a YouTube tutorial and knock yourself one up.

However, neither Will or I fall anywhere close to that category (I like to think we have skills elsewhere!) so we needed some more help.

Will found Pizza Oven Supplies, a company that makes and supplies all the materials and pre-formed bits that you need. We ordered the Milan 750 Pizza Oven kit.

So for the technical blurb, it has a refractory and insulated two-piece oven floor with 750mm wide cooking area.

What that means for me and you – it gets bloody hot and you can squeeze two pizzas in at once.

It also comes with a dome and an opening, a chimney, insulation and reinforcement, kiln blanket, aluminium vapour barrier (aka space jacket) and chicken wire.

There is more technical lingo, but you don’t need that at this point. What you need to know is it will be delivered on a heavy pallet and your work is not yet done. 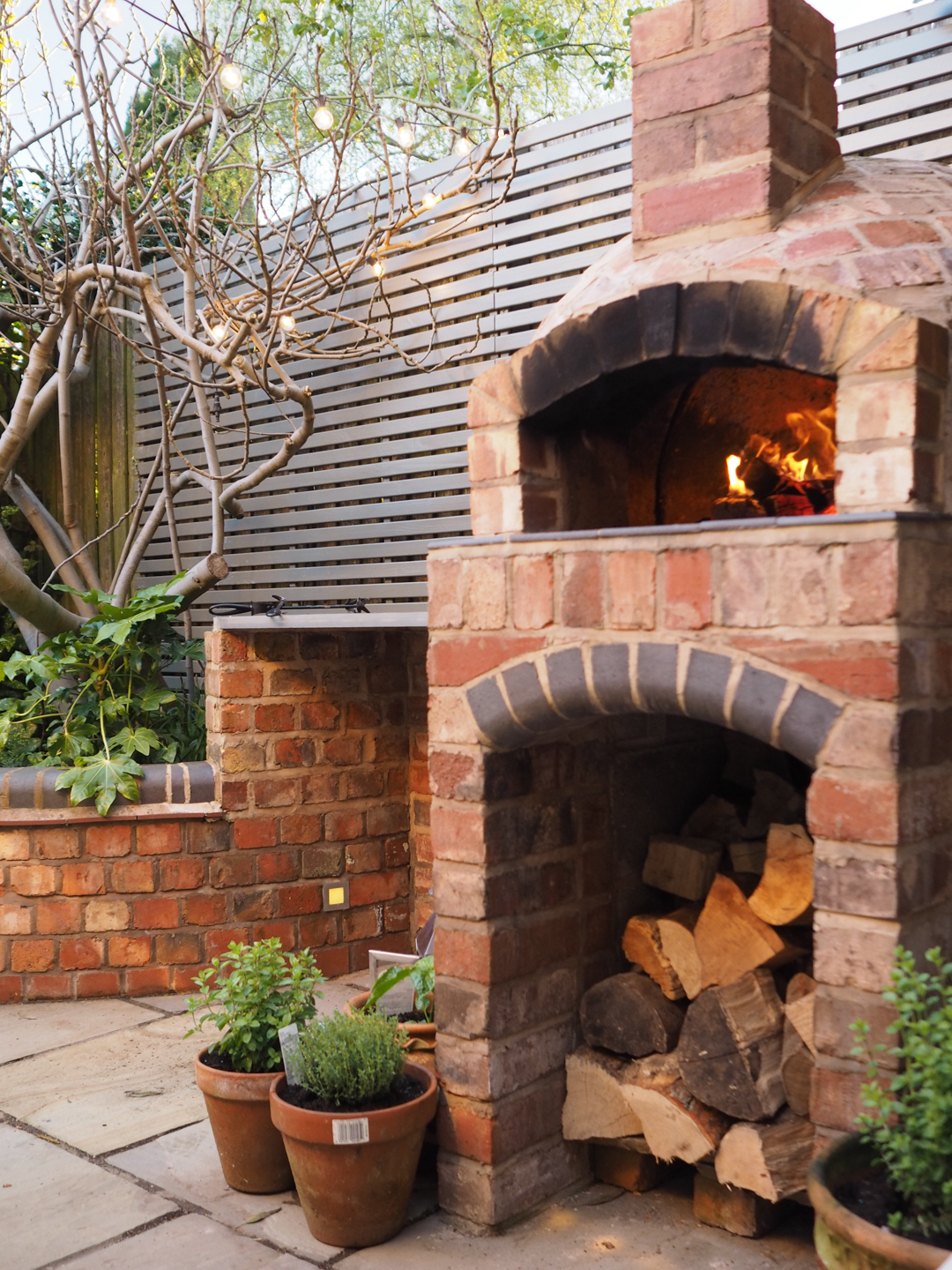 Before you get to the actual pizza oven bit you need to create a base. We wanted it to blend in to our existing structure – we had built our extension and garden wall in carefully chosen reclaimed bricks (oh the hours spent at reclamation yards comparing colour and character of old bricks!) so we knew we wanted to build our base to match that.

There are loads of other ways of creating a base – timber, stones, breeze blocks etc but we had some bricks left over so the next stage for us was getting a bricklayer in.

This is where it got a bit tricky for us. It was summer and every – and I mean EVERY – bricklayer was booked for the rest of the millennia. And they certainly didn’t want to be faffing around with curves and drawings and things they weren’t sure of.

After much searching and calling we eventually found a chap who said he’d be able to get it done in a weekend. He came and worked a full day, marked out where it should all go and he built about a half of the base. He didn’t come back the next day, or in fact ever again. I really don’t know what happened (and I also really hope he is OK) but it left us in all sorts of trouble…if people initially didn’t want to start the job, they certainly didn’t want to pick up where someone had left off.

Again, more weeks went by, we had several people round to quote, many who then totally ignored us after! Eventually we found someone who finished it all off as well as doing some extras for us. In total between the two guys it was six days of bricklaying work. I would say if you keep to the original design it would probably be between two and four. It *may* useful to cost this in at the beginning (we didn’t!). 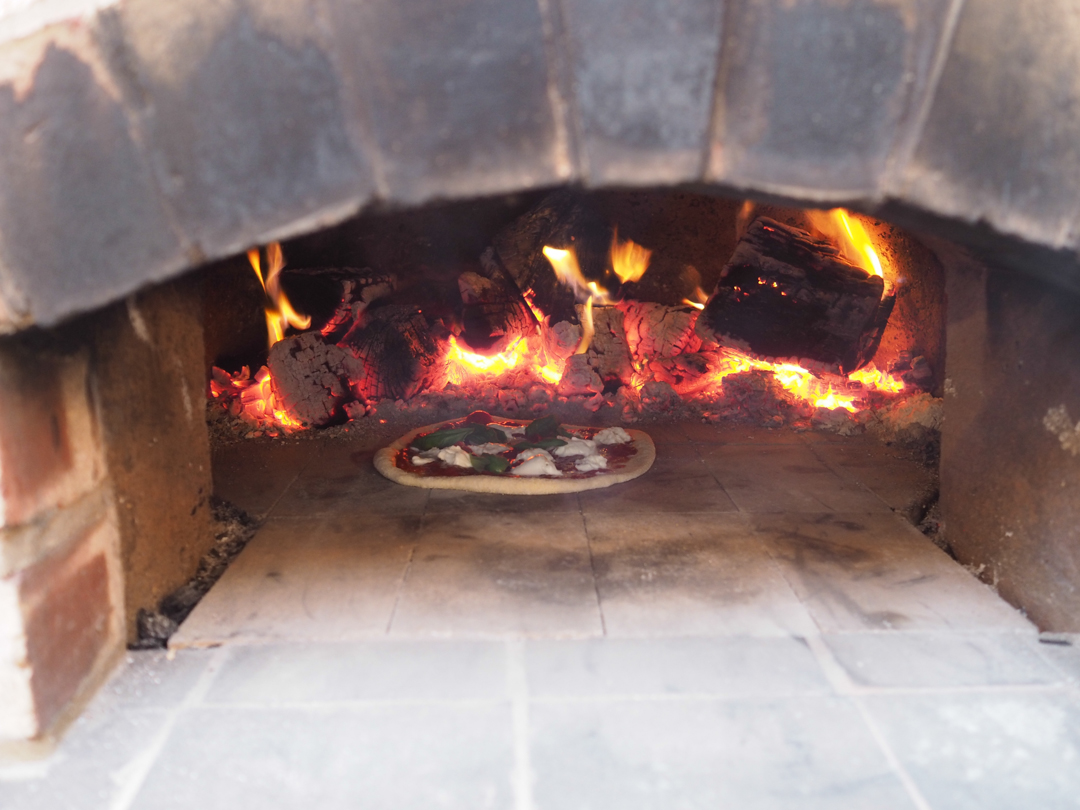 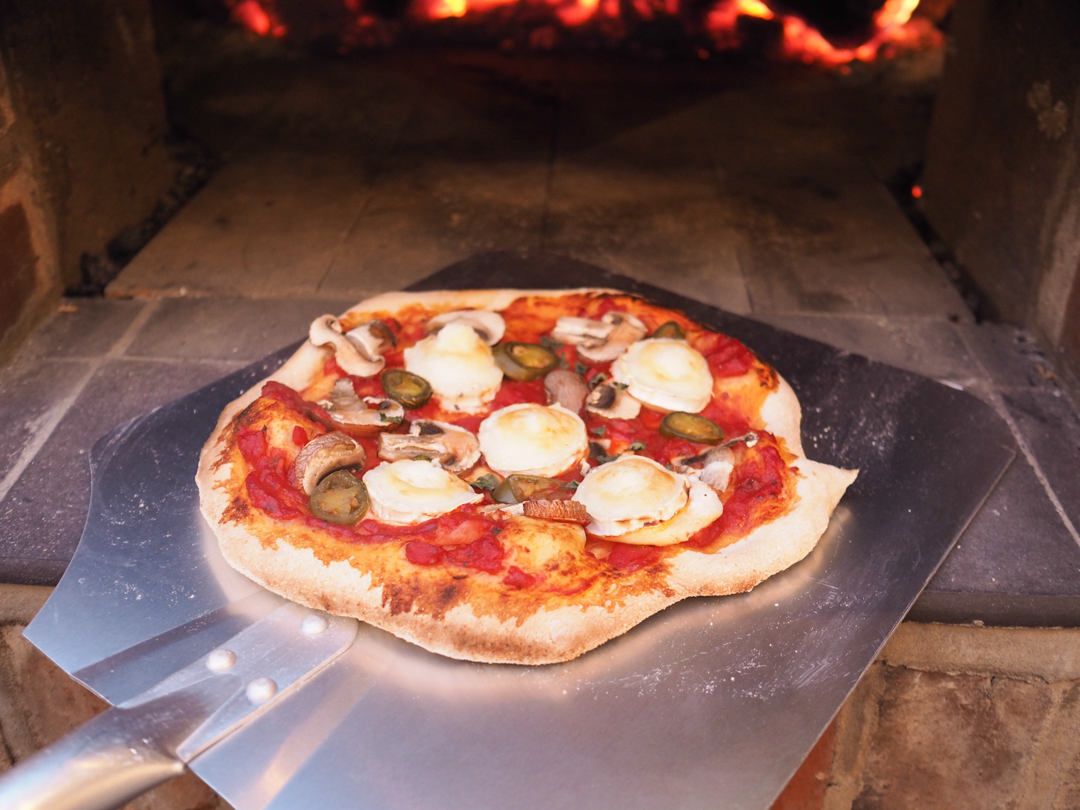 As the oven is full sight from inside the house we wanted to make sure it was lovely to look at rather than an eye sore, so we made some little tweaks to the design. We used our reclaimed bricks for the dome even though the kit came with some pre-cut ones – there was nothing wrong with them but they were new and we wanted that lived-in cohesive feel.

We also used blue bricks to create the feature arch and knocked down part of the existing wall to add in a work top – slate, which was bought from eBay, and make it look like it had all always been there.

We had to wait a week after it was built before we could light a small fire in it to season it and then we were good to go!

We used it regularly from the end of August (our first pizza was on our first wedding anniversary!) right up until it was too cold to stand out there stoking the fire! It is an absolutely brilliant and informal dinner party option and I can’t wait to throw a big party in the summer and serve up loads of pizza.

I’ve planted up a load of herbs around the pizza oven that can be sprinkled on top of the pizzas for some extra deliciousness.

I have only ever made pizza in it but I have heard you can make all sorts – I am not sure I will be easily tempted from the pizza though as they are just SO good! 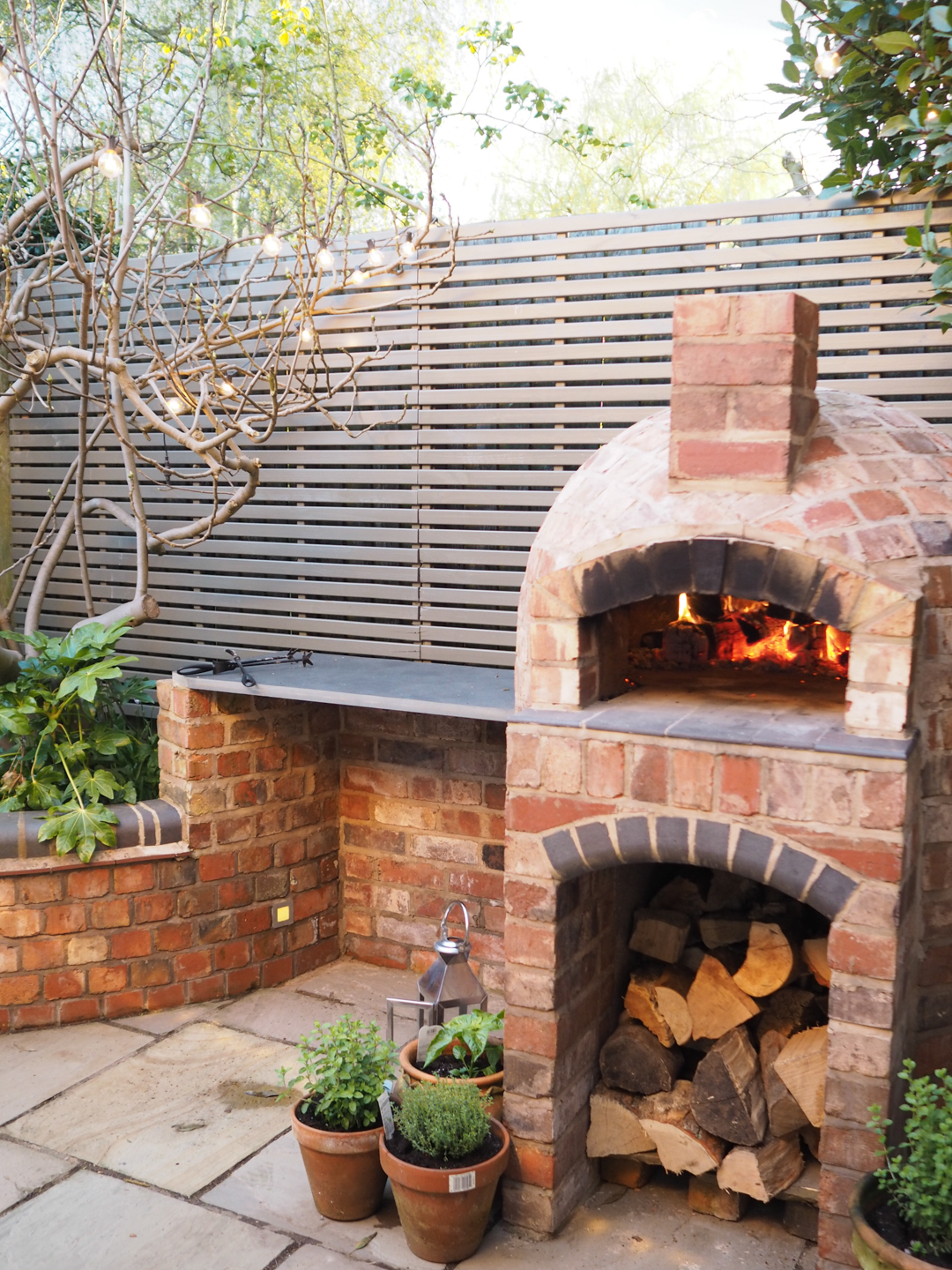 Wood – Firstly you can’t burn any old wood in a wood fired pizza oven and expect good pizza. You need a good kiln-dried hardwood as it burns much hotter.

Heat – I find the best pizza is made in the hottest oven – we go for between 350 and 400°C and the pizza only takes about four minutes to cook. The dough will be light and crisp and utterly delicious. The longer the pizza takes to cook the tougher it will become.

A peel – or a paddle as I call it. We have a couple of these as they are good whilst you are making a number of pizzas.

A brush – to sweep up the ash and move the fire about as necessary. Ours is similar to this one.

Dough – make your own dough. It adds to the experience and tastes delicious. I follow this Jamie Oliver’s recipe and always use semolina to roll the base out on to. 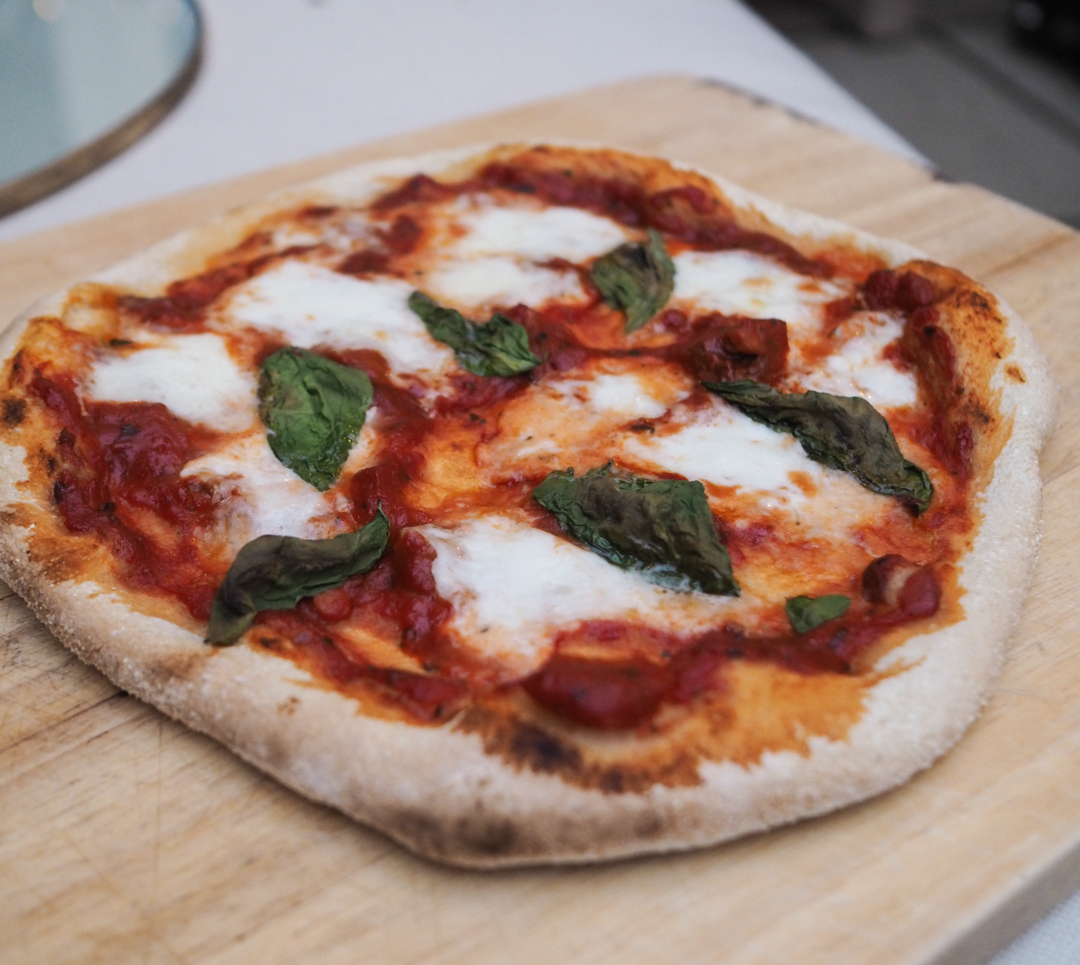 So, are you tempted to build your own wood fired pizza oven?