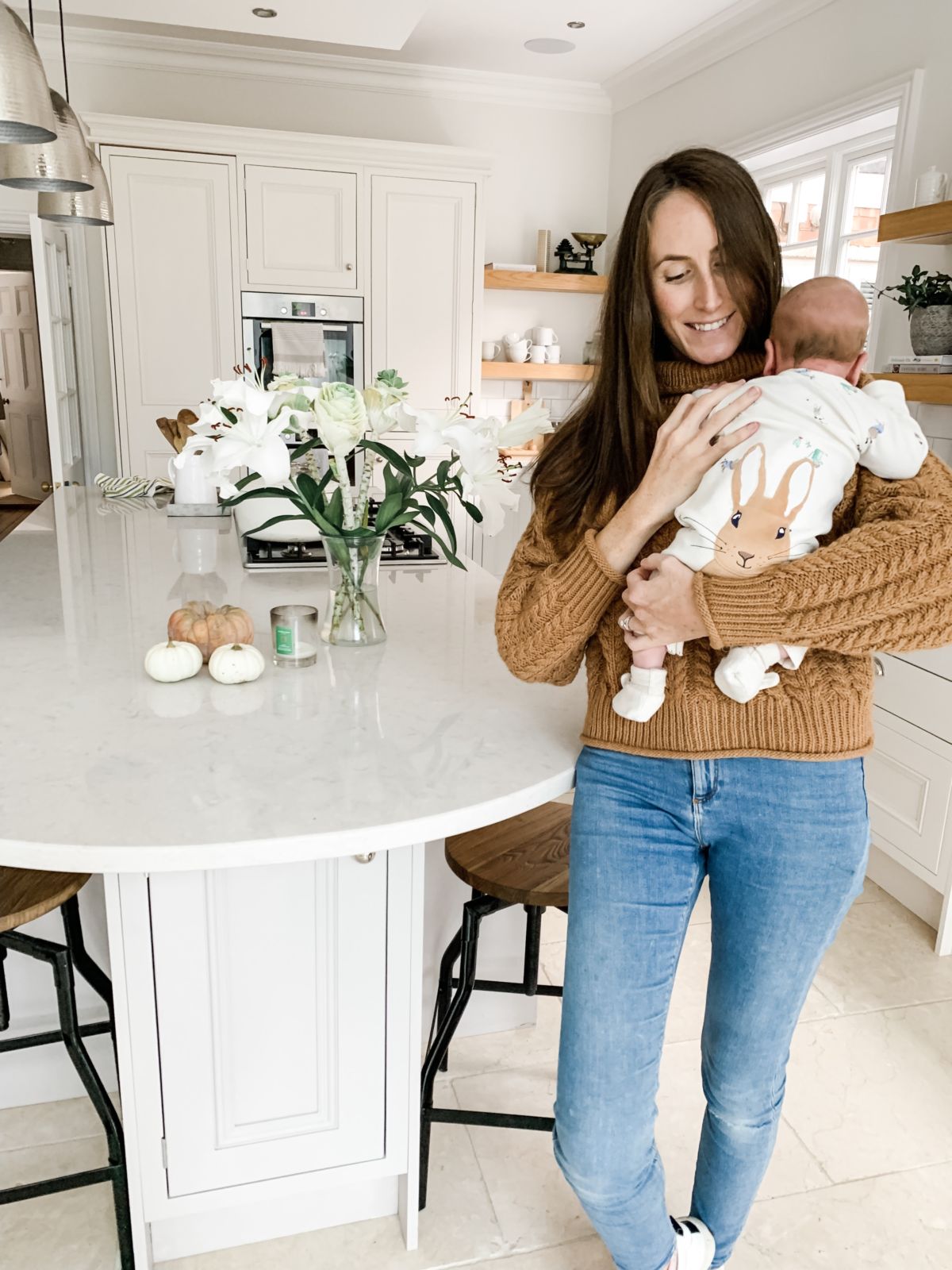 I am so proud to say this positive birth story is mine and I knew I wanted to write it down not only to share with you but also for me to remember and look back on in years to come. I’ve not been able to keep it brief so have broken it in to two parts!

During my pregnancy I became so interested in people’s positive birth stories and loved hearing and reading about them.

Nb not so much the scary ones, which do have a place too because you need to know that things don’t always go to your plan but it can all work out just fine regardless, but for me I needed to focus on how it could go to plan and keep that in my mind as I got closer to labour myself without recalling and fixating on all the things that might go wrong.

Each birth story is so unique and lovely they would bring me to tears every time.  I am not a very cry-y person and so this was a surprise in itself and if I thought about my own baby’s birth, my eyes would instantly well up.

I did quite a lot to prepare for my little bump’s arrival and I am certain that one of the game-changing things to get my own positive birth story was hypnobirthing.

I bought The Positive Birth Company’s Hypnobirthing book and was quickly on board. Siobhan saw I was reading it and kindly gifted me access to the online course* – it is only £39 and I can confidently say if you are pregnant this would be the best spent £39 of your life.

*I was under no obligation to share, I am just truly a massive fan now!

It sounds airy fairy and Will was incredibly sceptical about it but in the end I managed to convince him to give up a Sunday to do the course and within 30 minutes he was fully on board and is now a huge advocate of hypnobirthing too. It is actually very scientific. 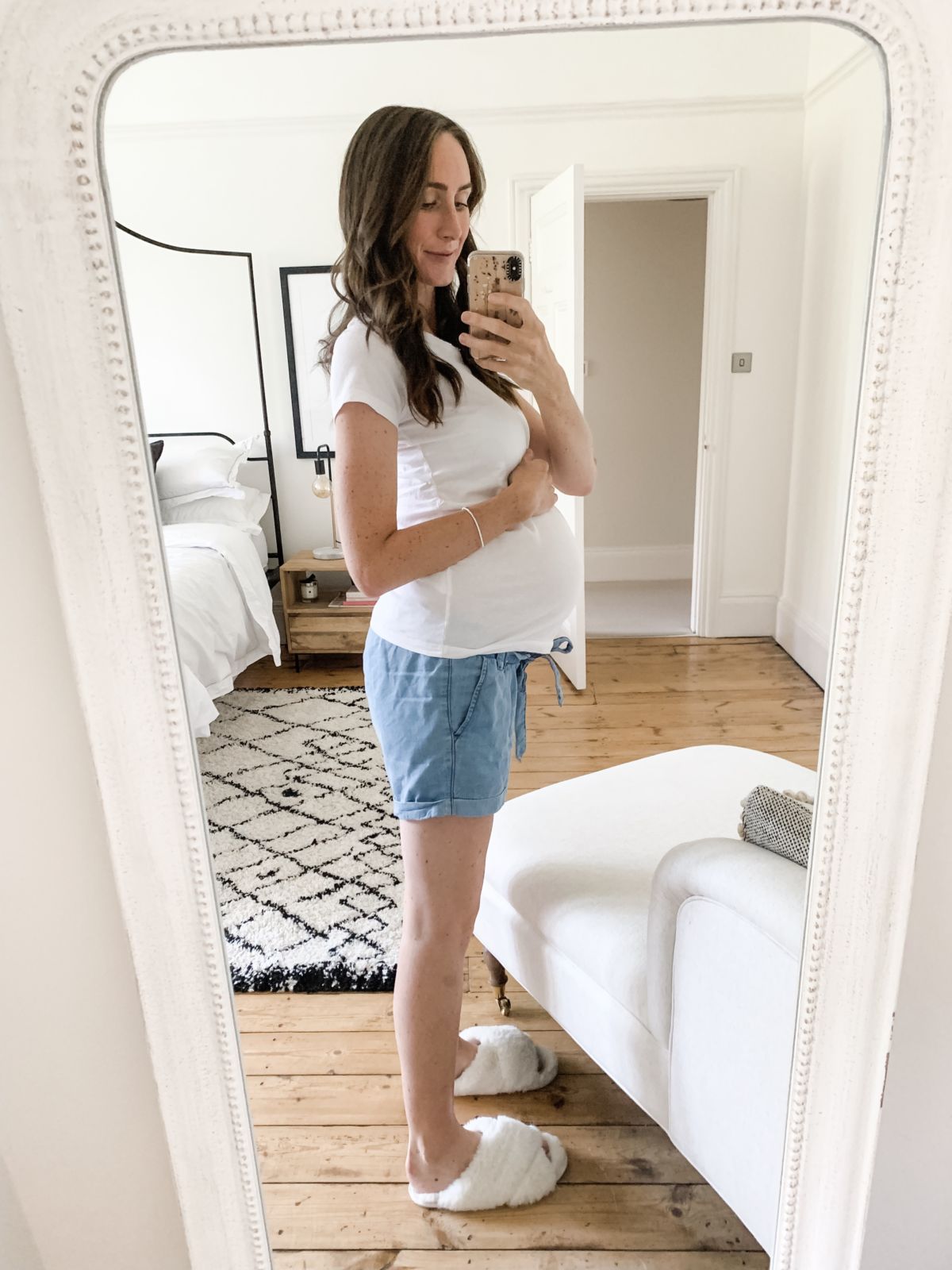 One of my last full bump pictures!

I approached my due date feeling confident and excited and full of hope that I would get my own positive birth story. I only had one doubt and fear in my mind which was having scoliosis – a curve of the spine. Years ago someone with scoliosis told me that their back meant their body couldn’t let the baby out naturally and they had to have an unplanned c-section and ever since then I have been scared this would be the case for me.

But enough of the background, you are here for the actual story!

My due date came and went and I never felt like I was getting close to going in to labour. Daily texts from well-meaning friends and family were driving me bonkers and I was ready to meet my baby. In fact, as my bump looked small, people couldn’t believe when I told then I was past due and I had a number of people look at me in disbelief saying I didn’t even look half way yet!

On Friday, three days after my due date I went for my usual swim and basked in the wonderful Indian summer September weather we were having, even sunbathing by the outdoor pool for a while. 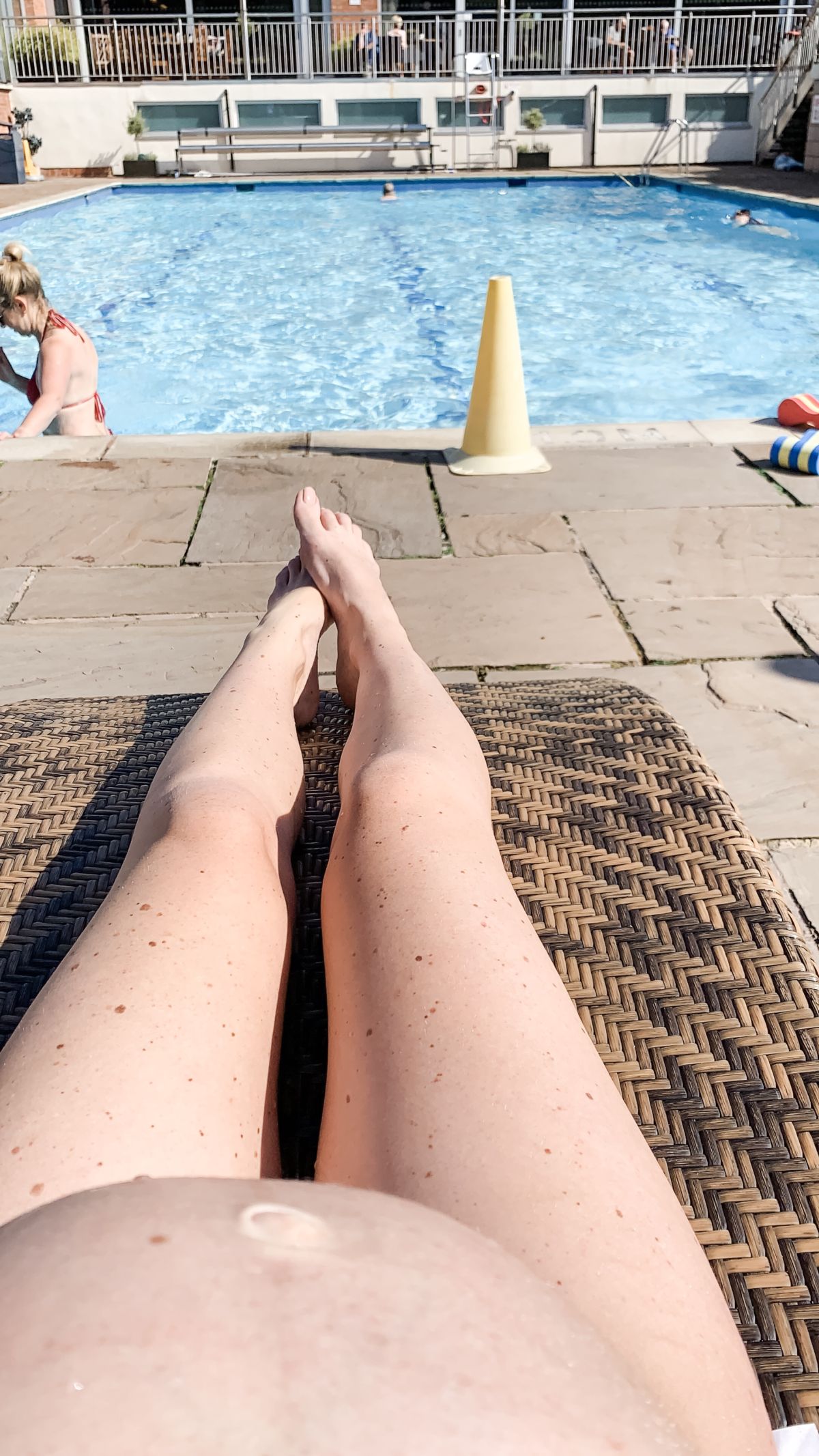 Swimming a couple of days before going in to labour

I enjoyed lunch on the terrace in the sun and wondered if this would be my last (ever?!) solo lunch! I had an acupuncture session booked that afternoon and my acupuncturist Jon assured me he was going to do a strong session to bring on baby and aid a speedy delivery. It indeed was strong and I had the biggest reaction that I had ever had, feeling a bit faint and dizzy during the session but absolutely fine afterwards.

On Saturday Will and I decided to tackle the garden and spent the day at the garden centre, planting up bulbs for the spring and giving the garden a really good tidy up.

I drank raspberry leaf tea (I had been having a mug or two a day for a few weeks) bounced on the exercise ball and willed the baby to come.

On Sunday morning I woke up early drenched in sweat with period pain cramps. A visit to the loo at about 5:30am showed I was bleeding a little and a couple of hours later there was more. I put a call in to the hospital feeling a bit worried. We went in to get checked out and they monitored the baby and examined me.

By this time the bleeding had stopped but I was getting cramps along with braxton hicks style tightenings so I thought perhaps I was at the very start of things happening.

The hospital assured me baby was fine and that nothing was happening! My cervix hadn’t even started to soften/move forward so we had a long way to go yet. As long as there was no more bleeding and the baby was moving I wasn’t to worry and they sent us home saying they’d see us in a few more days.

I was happy that things were fine but a bit deflated that I wasn’t even in early labour yet. When we got home I had a big bowl of porridge, a lovely snooze on the sofa and then we decided to go for a walk around the park. The tightening and pains were getting stronger and more frequent, but still felt like bad period pain/ needing to poo (TMI?).

After a bit of late lunch I spent an hour or so finishing up some blog work and emails. 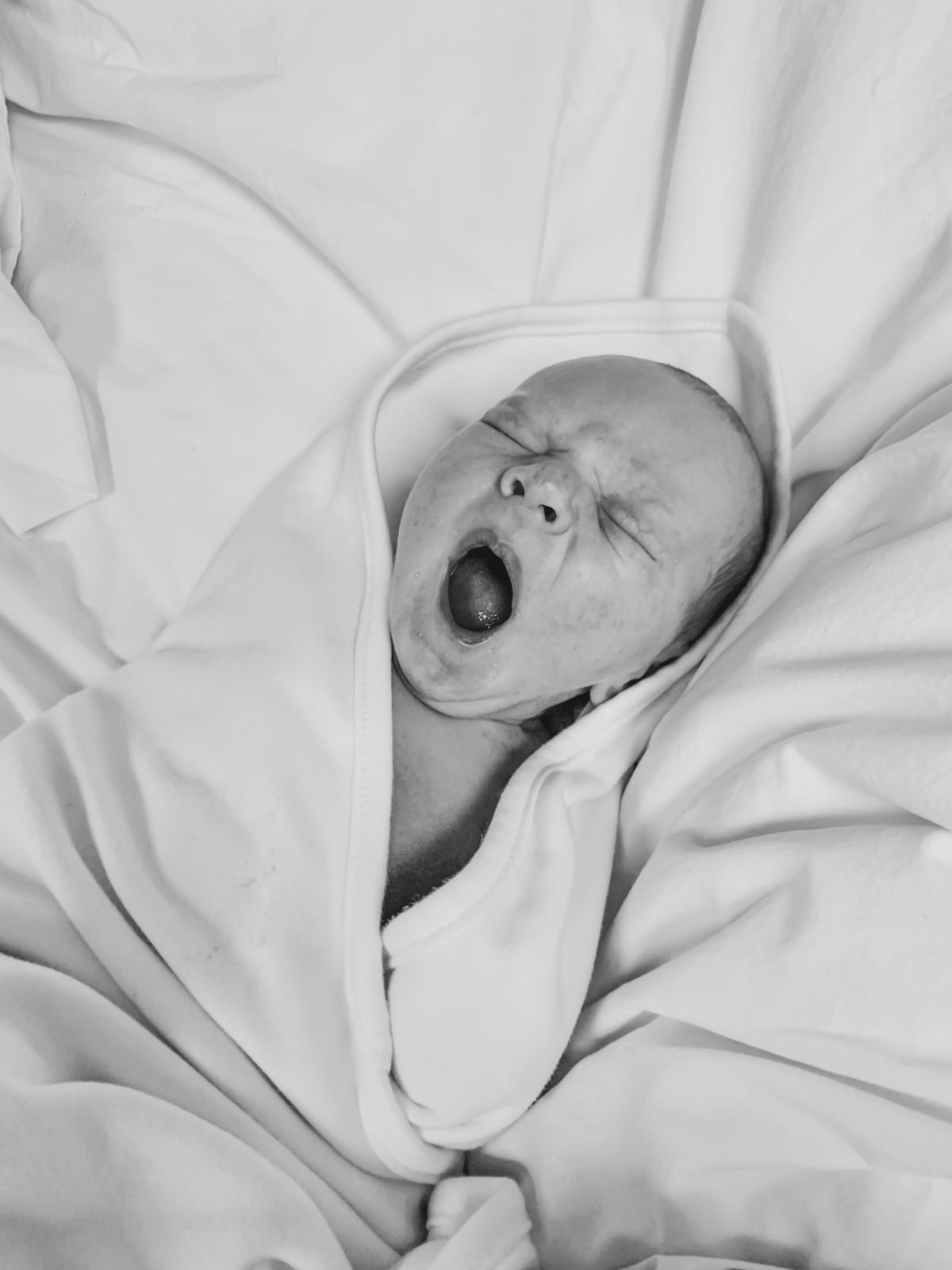 At 5pm things were getting stronger so I decided to start timing them on the Freya app. I was still unsure whether this was it, or perhaps just a long lead up to it as the hospital seemed to think. I put on a film (Hitch!) and bounced on the ball. I got about three quarter of the way through the film and things had started getting much more intense. I was now pretty certain that things had very much indeed kicked off!

By this time the Freya app said I was in established labour – about three surges (contractions) in every ten mins lasting about 45 seconds each – and Will was frantically making and eating a sandwich, terrified he might have to miss a meal! I tried the tens machine but didn’t like it at all so headed for a shower.

Time seemed to be on fast forward from there as things seemed to move fast and everything got very intense very quickly. I was using the breathing that I had practised through hypnobirthing; four breaths in through the nose and eight out through the mouth and it was so helpful in getting me through each surge. I took some paracetamol and Will ran me a bath.

I felt pretty relaxed and in control, but once in the bath things went up another notch. Will called the hospital and let them know how we were getting on. I also wanted to make sure that they knew I wanted a birth pool.

The lovely midwife spoke to both of us and typically when I spoke to her my surges stopped (perhaps because speaking to a stranger stopped my oxytocin/upped my adrenalin?). She clocked this and said she could see my notes from the morning when nothing had started and that alongside being a first time mum and that there were gaps in my surges it was quite unlikely I was in established labour and we should carry on at home.

I lasted about another 30 or 45 minutes before we called again. The surges were so intense I had started being sick after some of them (into the only thing at hand – the brand new baby bath waiting patiently by the real bath – sorry Seb!) and my show/mucus plug had come.

Again she encouraged me to stay at home as she didn’t want me to be disappointed if we got sent home but I was getting very concerned about the 15 minute car ride to the hospital and I was adamant I needed to go in.

The car ride was quite frankly horrible (the bumpy roads/students on fresher’s nights out!). I arrived at the Birth Centre at about 10:30pm and felt so sorry for the pregnant women waiting in the reception area for scans/monitoring as me and one other lady were in labour! Talk about terrifying!

Our midwife Effie who we’d been speaking to on the phone showed us in to our room, which I can best describe as a Travelodge style room with an ensuite and big bath in the corner. There was no medical equipment on show, no hospital bed etc and the lighting was low and subdued.