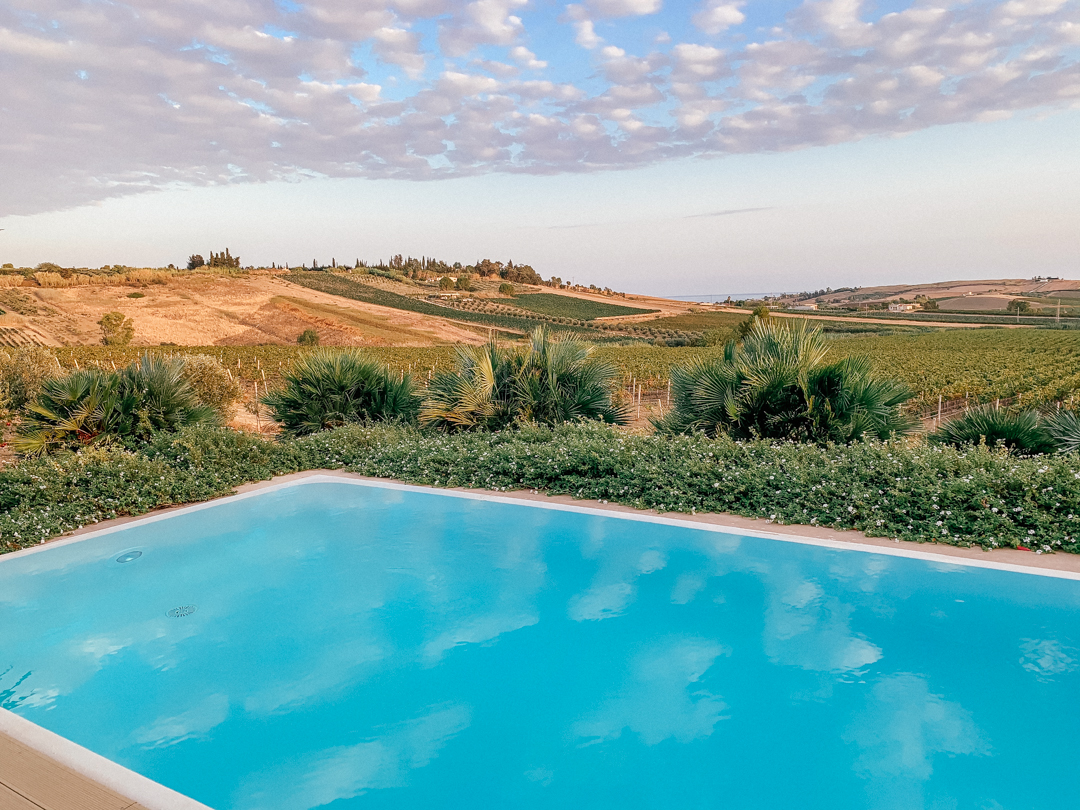 This year it was me who was in charge of all the planning and the first year that it wasn’t just Will and I, but Will and I and a baby! No pressure then!

I started thinking about it at the end of last year and after a little research I decided Sicily would be the location for our first year as a family of three. I was after a good villa and a sandy beach location. I did a bit of research in to villas and travel arrangements and made some notes ready to book in the New Year.

Then Covid-19 happened. As the summer progressed we accepted that 2020 wasn’t the summer for travel and our anniversary trip would need to be put on hold for a year. All our travel plans for the year were cancelled (a shame but a small price to pay given what was happening across the world) and I couldn’t envisage ever feeling like it would be safe to travel again. 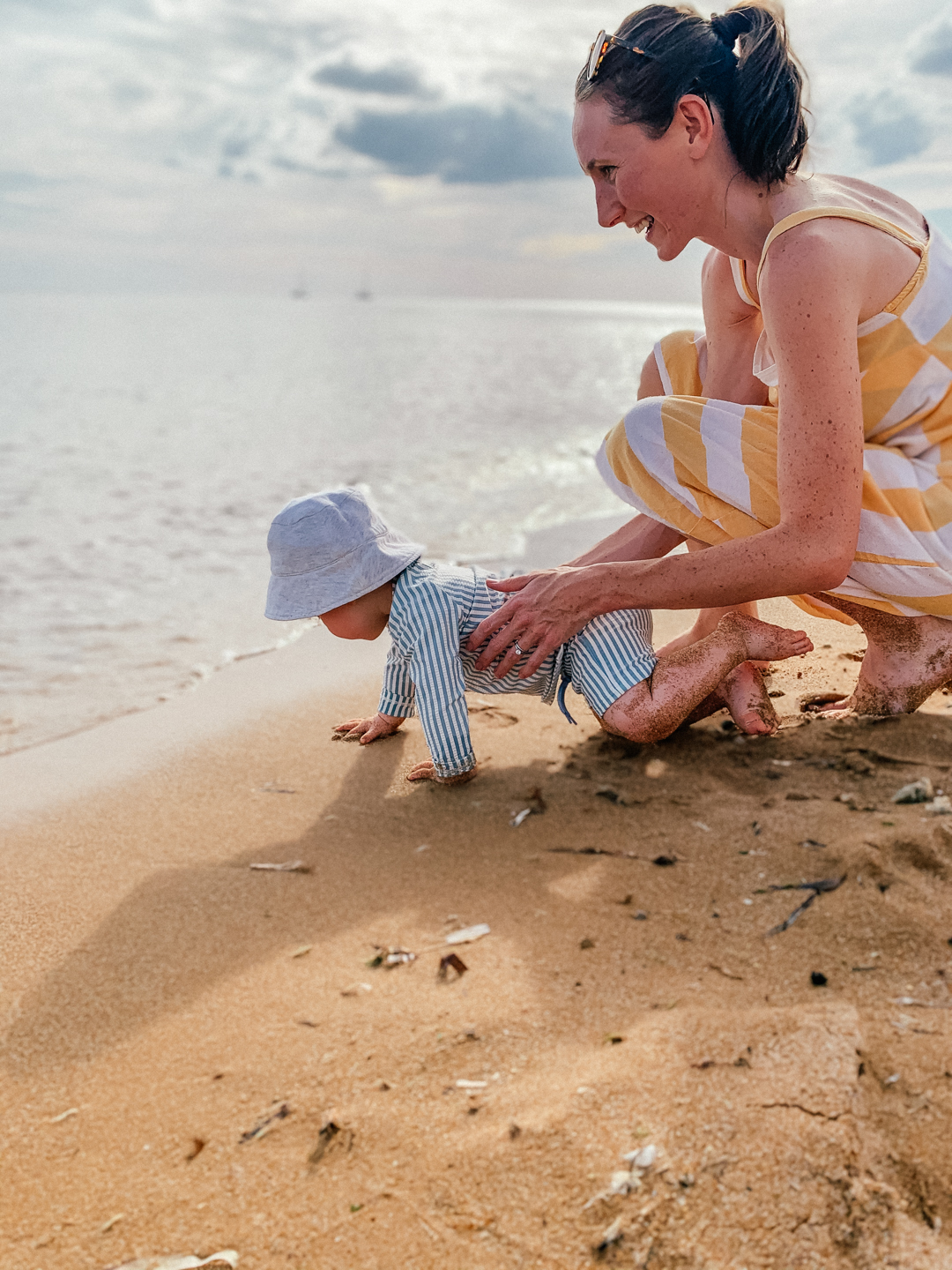 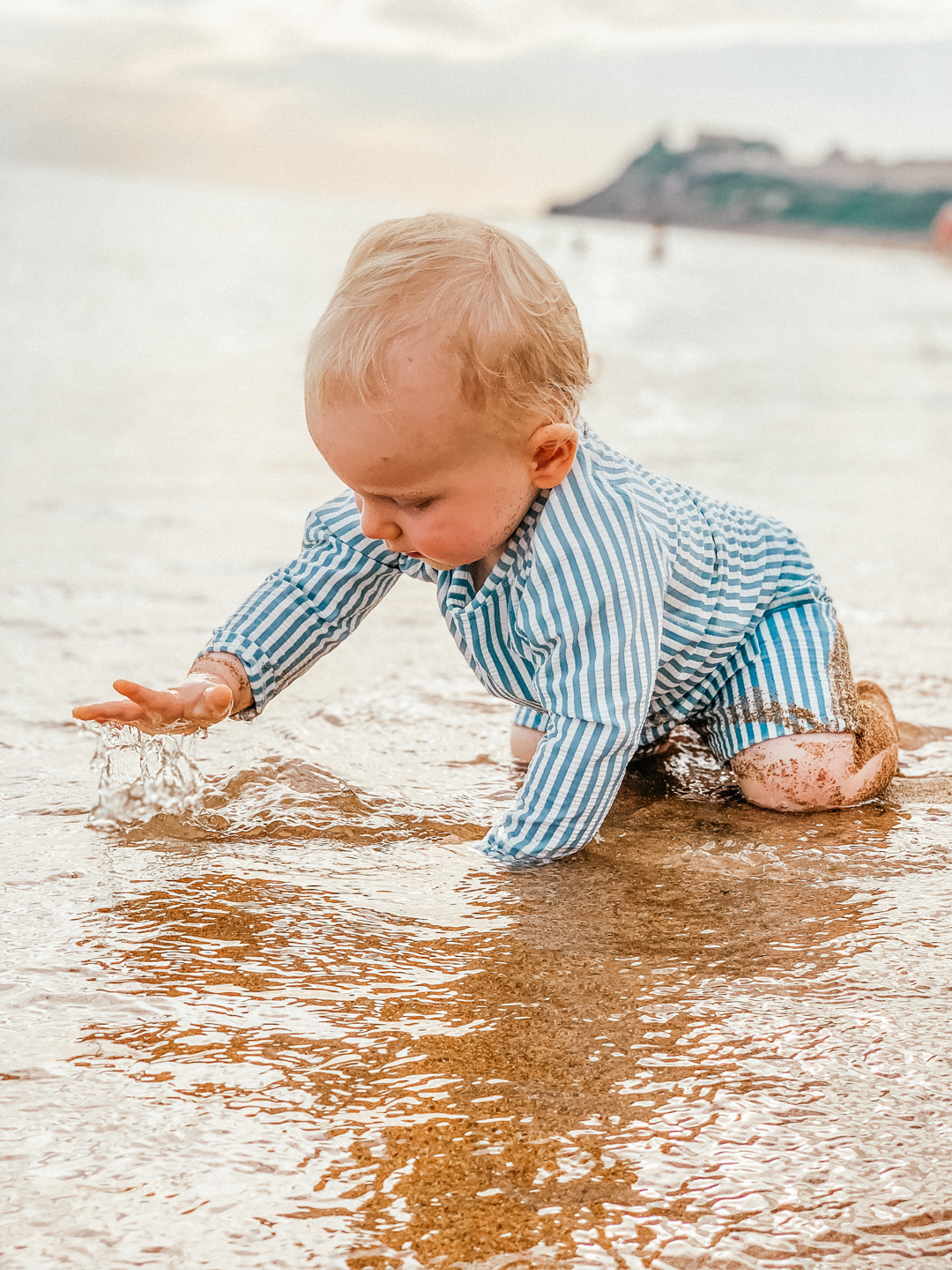 Lockdown eased but like many people it still took me months to start to think that travel in 2020 might be possible. At first I was too scared, then I did some research into how safe/risky plane travel was with the virus and started to get a glimmer of hope that actually, it might just be OK. By early August I started to feel the cabin fever set in from barely leaving the house for six months and that being in a secluded villa in a country that had low Covid-19 cases might be just the tonic.

I know its not for everyone at this time, but Will and I love to travel and it is one of the ways he gets to truly switch off from his busy job and we get to reconnect away from the mundane tasks of regular life. Once I felt more confident that we could do it safely without putting our family at risk, I couldn’t get it out of my mind. Will had some time booked off for the anniversary trip so we decided to leave it last minute, see where was lowest with Covid and book something if it felt safe to do so.

As it happened Italy’s Covid rates were super low and we started getting excited. We agreed I would tell Will my intended Italian location and we would work together to book it for this one time.

With only one week notice we found a gorgeous villa in Sicily, booked flights, packed (many, many) bags and we were off! 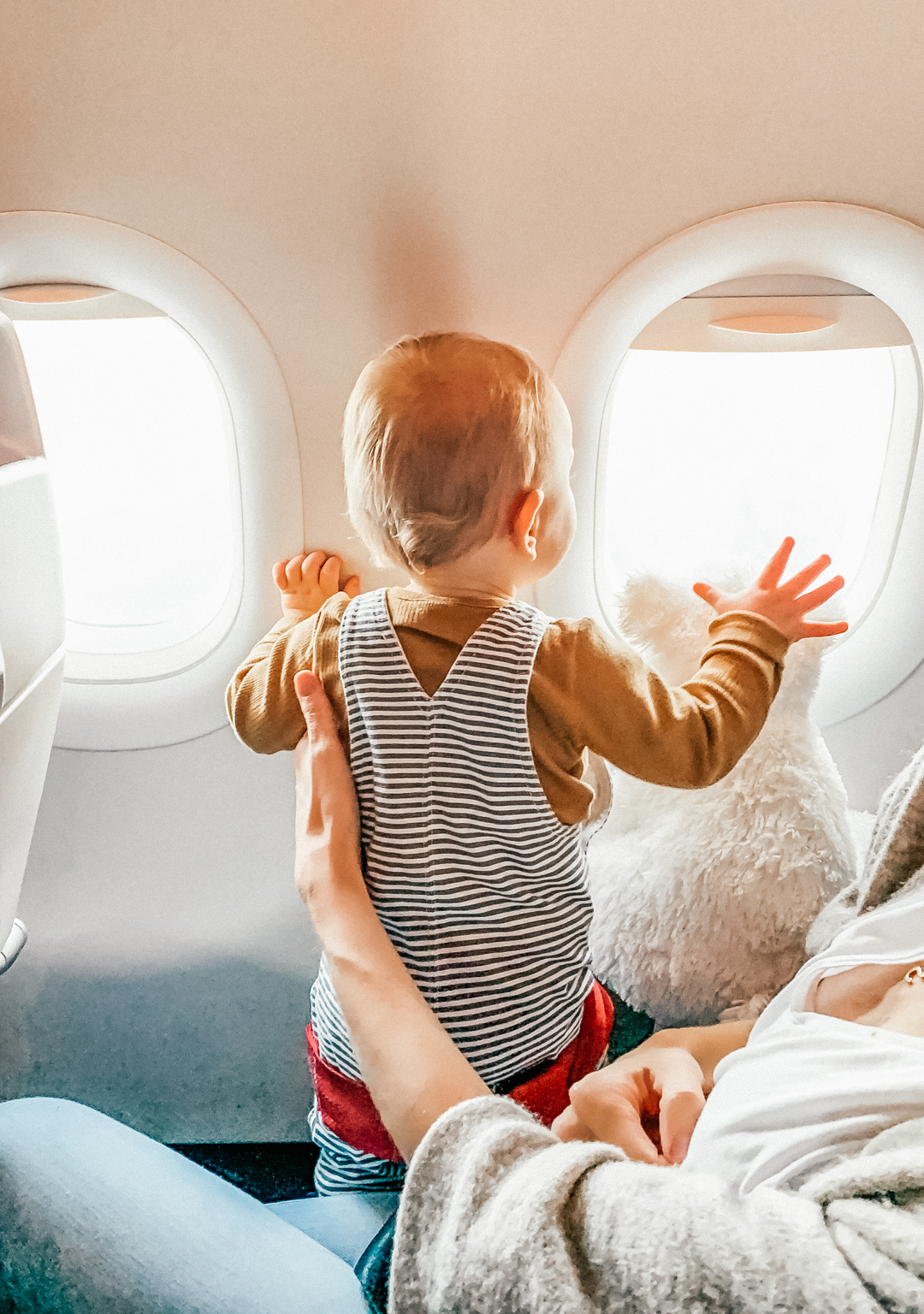 Where we stayed in Sicily

We chose a villa as we wanted to be able to put Seb to bed in the evening and not be confined to a balcony/being silent/all going to bed at 7pm.

It worked out so well, we were able to pretty much stick to our usual routine with Seb which meant we didn’t explore Sicily much at all but we did get time to ourselves to relax in the sun and enjoy the beautiful view.

The villa felt like home really quickly and Seb settled in really well too. It was amazing to have our own space, a beautiful view and a pool all to ourselves especially in these times. We booked Villa Le Cicale through Select Sicily.

The only downside to a villa holiday is that you have to cater for yourselves pretty much as much but cooking meals for us in this beautiful Italian kitchen was such a pleasure and eating them in the warmth outside even more so. There was an option for a local Nonna to come and cook a meal for us at the villa which we thought we would do at the start of the week but the days went by so quickly we never got around to arranging it. Next time that service is available I would be more proactive though as I imagine it would have been great especially if she washed up too!

We chose the villa more for the villa itself than the location in Sicily as we had some specific requirements – the pool couldn’t be too accessible from the house (some had the pool only a few metres from the living area of the house which ordinarily would have been lovely but isn’t so great with a fast crawling explorer), no more than an hour from the airport, we wanted a good view to enjoy, at least two bedrooms and a bath if possible, close to a sandy beach….and of course it needed to be available the very next week!

This villa pretty much ticked all our boxes. The area didn’t feel very touristy at all and we didn’t come across any other obvious tourists only Italians but I guess it was much quieter than usual and we didn’t leave the villa much so maybe we just didn’t see them? It made it feel very authentic though. There were two beaches about a ten minute drive away both of which were lovely for sandy and clean with a few restaurants / beach cafes on.

We visited the local town Menfi once but there didn’t seem to be much there at all – it was very, very small and quiet – not really a hub so to speak so we didn’t go back again.

The villa was actually the grounds of a local vineyard which had its restaurant just a short walk away. We didn’t eat there but we did wonder up one day to get a couple of bottles of wine – one of which was from the grapes that had been surrounding us.

On a side note – it was grape harvest time and I just LOVED seeing the trucks go by on the road overflowing with juicy grapes! Such an authentic scene and I can’t help but think about the delicious wines they will make!

Normally my anniversary trip blog posts are full of recommendations of places to visit and eat but I don’t have much of that in this post I am afraid – we really did stay glued to the villa! There was a Lidl about 15 minutes away so we did a big shop in there on the first day and bar a few trips out to the beach and Menfi we really didn’t do much else. I must say, staying put did have its merits though as it was wonderfully relaxing not having to think about where we would go/what we couldn’t miss etc. 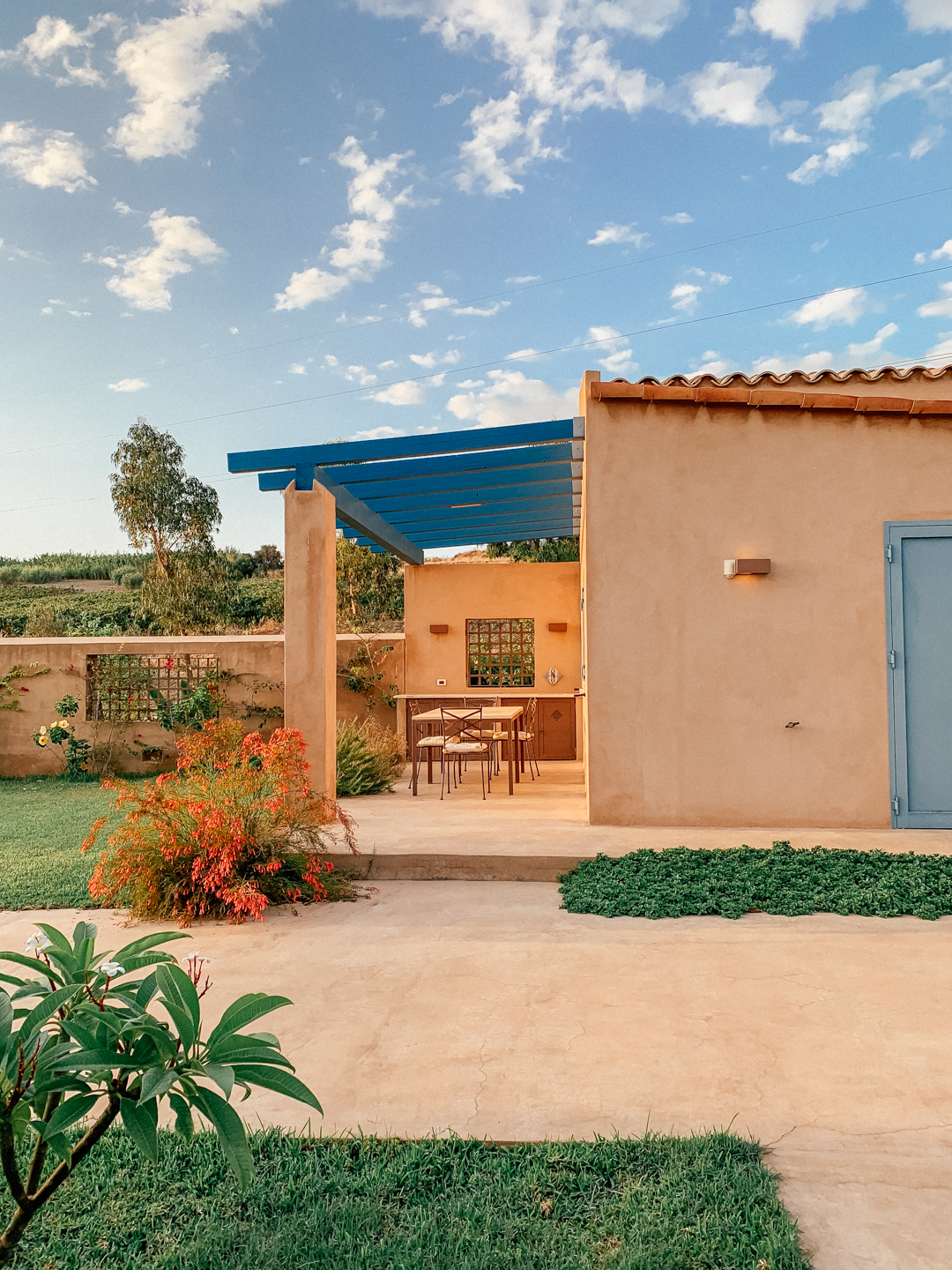 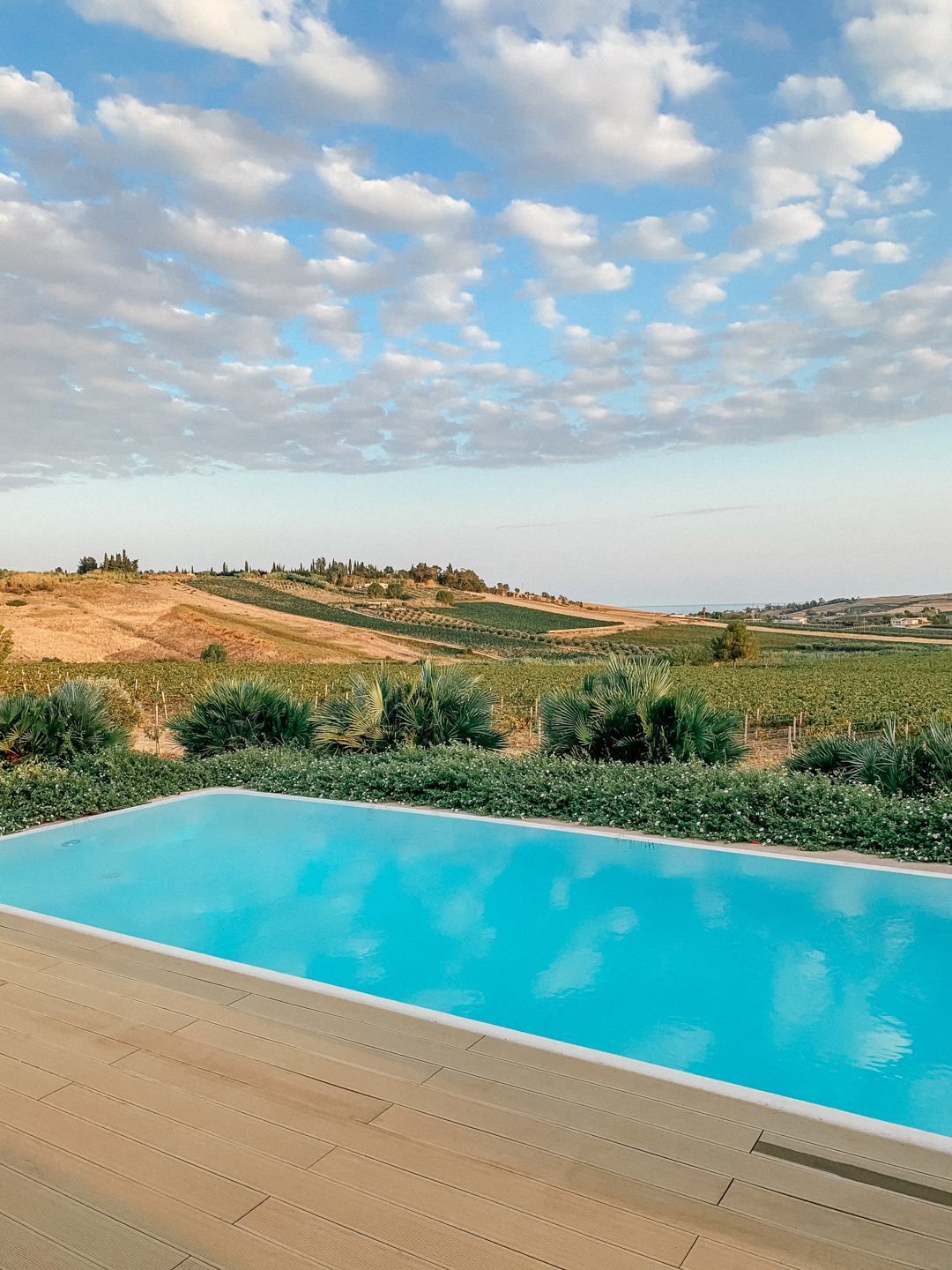 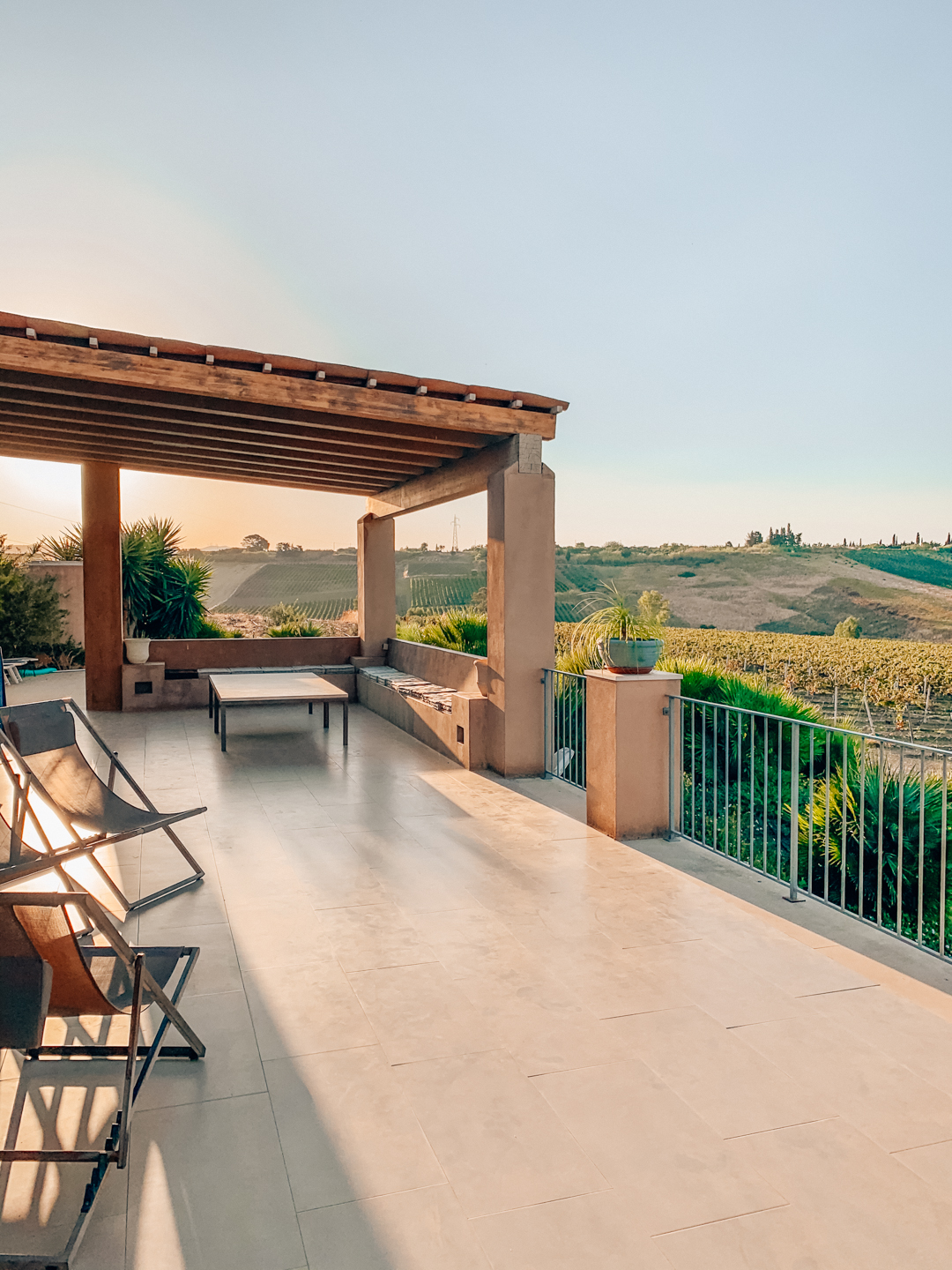 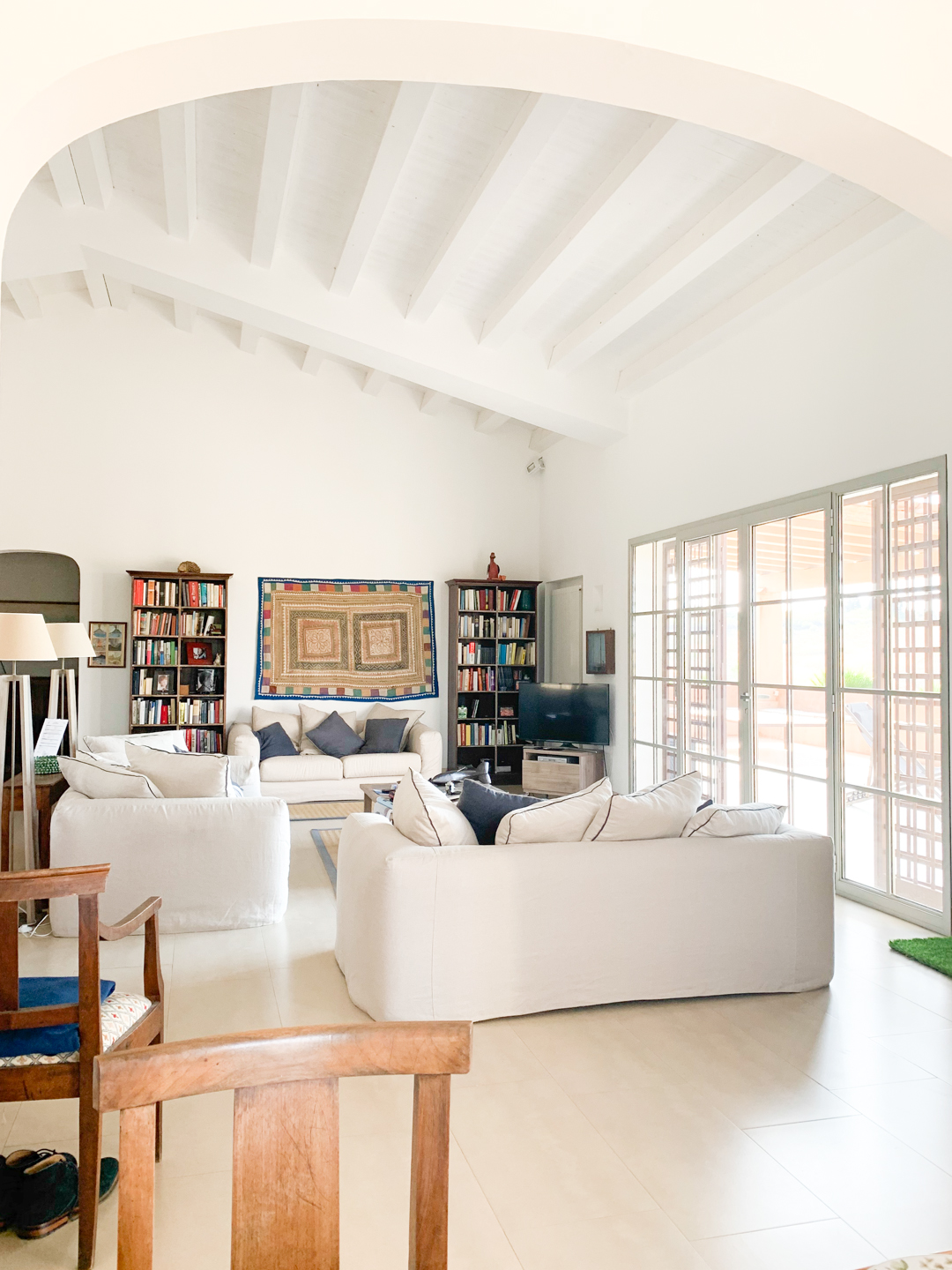 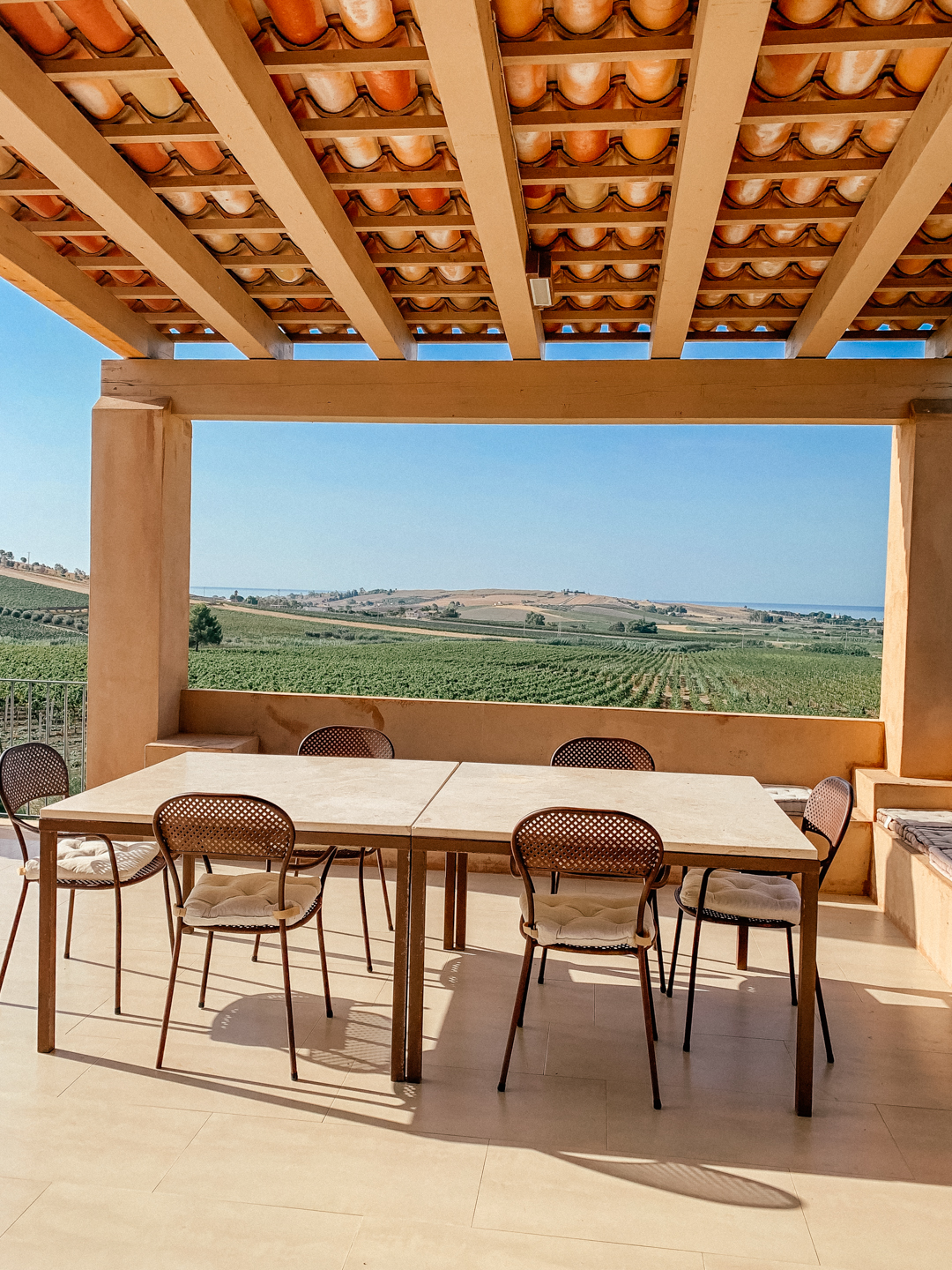 Everything was pretty much straight forward where travelling was concerned. Will and I had to wear masks in the airports and during the flight and at first I was worried about this but it wasn’t as bad as I suspected it might be. You kind of forgot it was there after a while and could take it off to eat and drink so really it wasn’t too bad. We wore the blue disposable masks as I have found them to be the coolest.

Other than that we had anti-bac at the ready and used it regularly where we couldn’t wash our hands. When we got on the plane they told us the plane had been cleaned but they also handed us little ‘clean’ packs which included anti-bac wipes so we wiped all our seat areas down again and anything we would touch for peace of mind.

Other than that we were just careful to maintain our distance from others, touch as few things as possible and wash our hands. I didn’t feel like we were at risk or unsafe at any time. 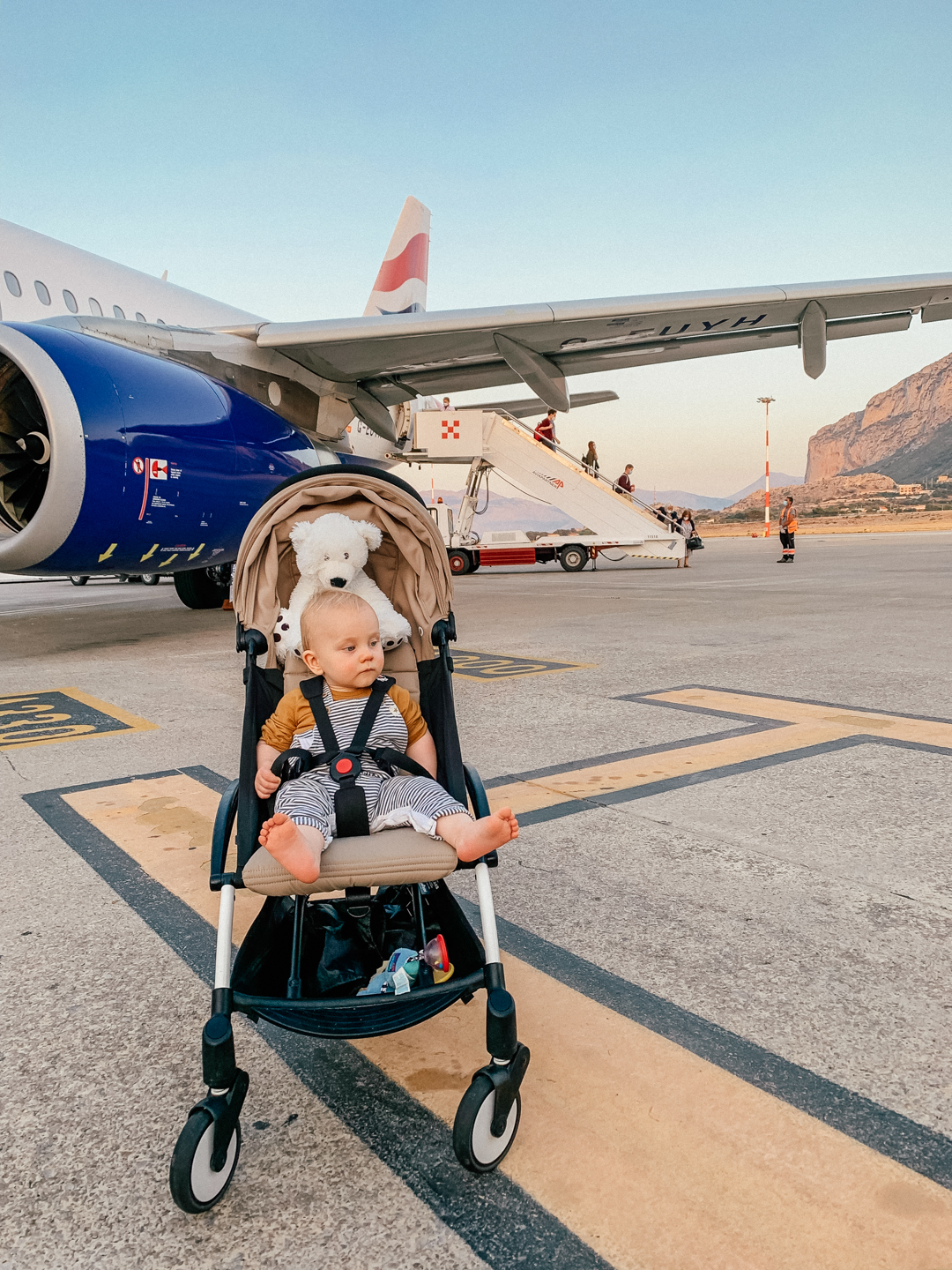 Travelling with an 11-month old

Seb was absolutely brilliant on our travel days. The flight times were good both ways and meant Seb could sleep in the car on the way to the airport and nap on the plane for the afternoon nap. He never naps as well on the go as he does in a cot but he did enough to get him through the long travel days.

I packed lots of easy snacks for him to keep him occupied as well as a couple of new ‘That’s not my‘ books, his favourite teddy and a small robot thing that keeps him occupied for ages. To be honest though he loved looking out the window/playing with the seat straps most of all. It was so sweet to see how much he loved looking out the window especially as we were landing and he could see the sea/land.

We had upgraded to business class (not as exciting as it sounds on short haul planes) but it did mean we had three seats between us and the extra space was very welcome also being able to go to the lounge in the airport was good as Seb had space to crawl about and use up some energy. I must admit I was really disappointed with the BA lounge at Heathrow – and that is their flagship one! But the service was just pretty sub-standard, perhaps it was Covid disruption? 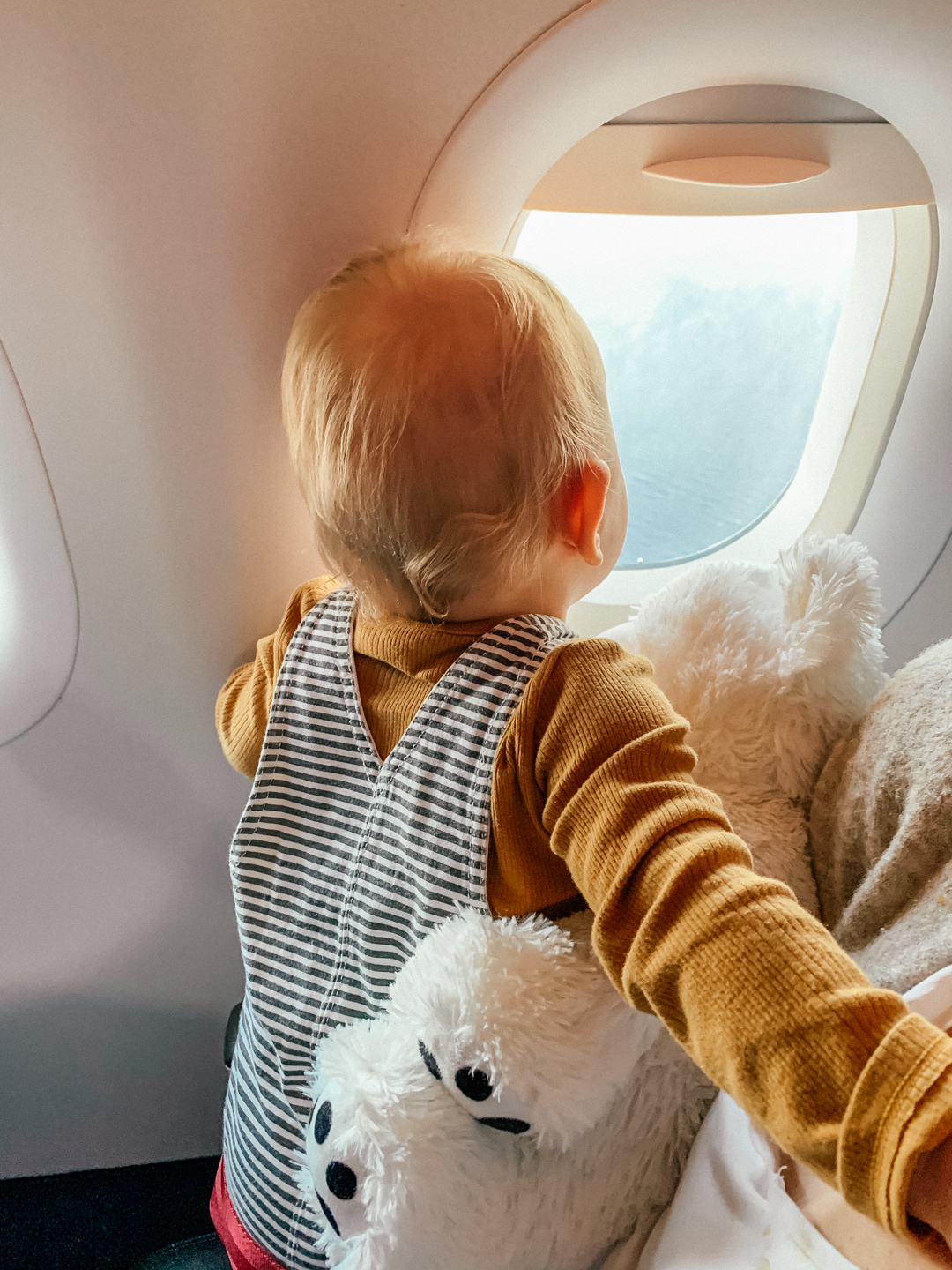 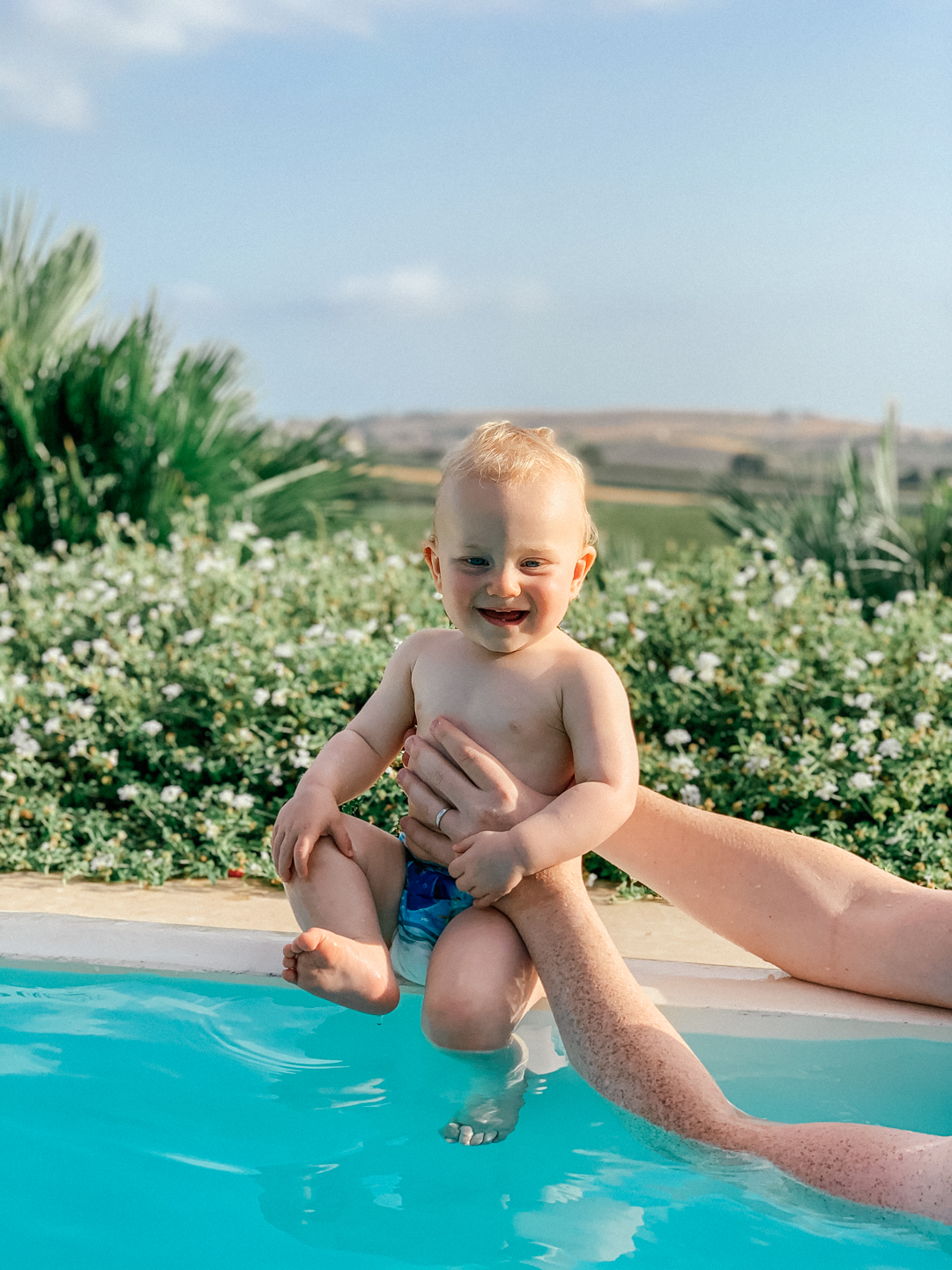 We travelled with the BabyZen Yoyo which we have had since just after Seb was born and I find it the best way to get a baby through the airport and on to the plane. You can take it right up to the plane door and then quickly fold it down and take on as hand luggage. I also have the Joolz Aer (which was recently gifted to us). Both are brilliant and each have their own USP – the Aer folds down with one hand which in the airport scenario is just brilliant but we took the YoYo in the end as we have the sun umbrella for it, we knew we would need the shade.

A couple of days we ventured out to the local area. It was still so hot so really it was too hot to take Seb to the beach in the day but we went one evening and had the most gorgeous couple of hours playing in the sand and the sea as the sun was low.

There was a lot more that I wanted to see in Sicily – I would love love love to go to Palermo and it is easily doable by car for the day from where we stayed but we didn’t think Seb wold really enjoy it and as he still is a bit hit or miss with the car we preferred to stay closer to the villa.

I WAY overpacked for Seb ordering far too many summer clothes that actually he hardly wore and sadly will have long grown out again before we need summer clothes again. But I did get some great swim stuff that is now in the sale. This rash guard was great to wear with just a swim nappy, and I loved this all in one swimsuit (both of those now in the sale) but this little Liewood outfit (top and shorts from Scandiborn) was just the cutest!

As Seb has allergies I also packed quite a lot of food. I did check with the villa company whether I would be able to buy some dairy free essentials (I know UK is ahead of many other European countries on free-from products) and they said I would be but I was still cautious. I packed his favourite DF milk, some DF Ella’s Kitchen pouches and a few DF ready meals for him. I also took Cheerios and Readybrek just in case you couldn’t get that out there! I think this will be the reality of holidaying for us for a while as it is hard to know for sure in foreign countries what is safe and what is not and it was so reassuring to know I had a bit of back up.

Holidays aren’t the same as they were and it took a bit more planning and packing to get us all there but it as definitely worth it and as soon as Covid-19 does one again we will be heading off somewhere again. 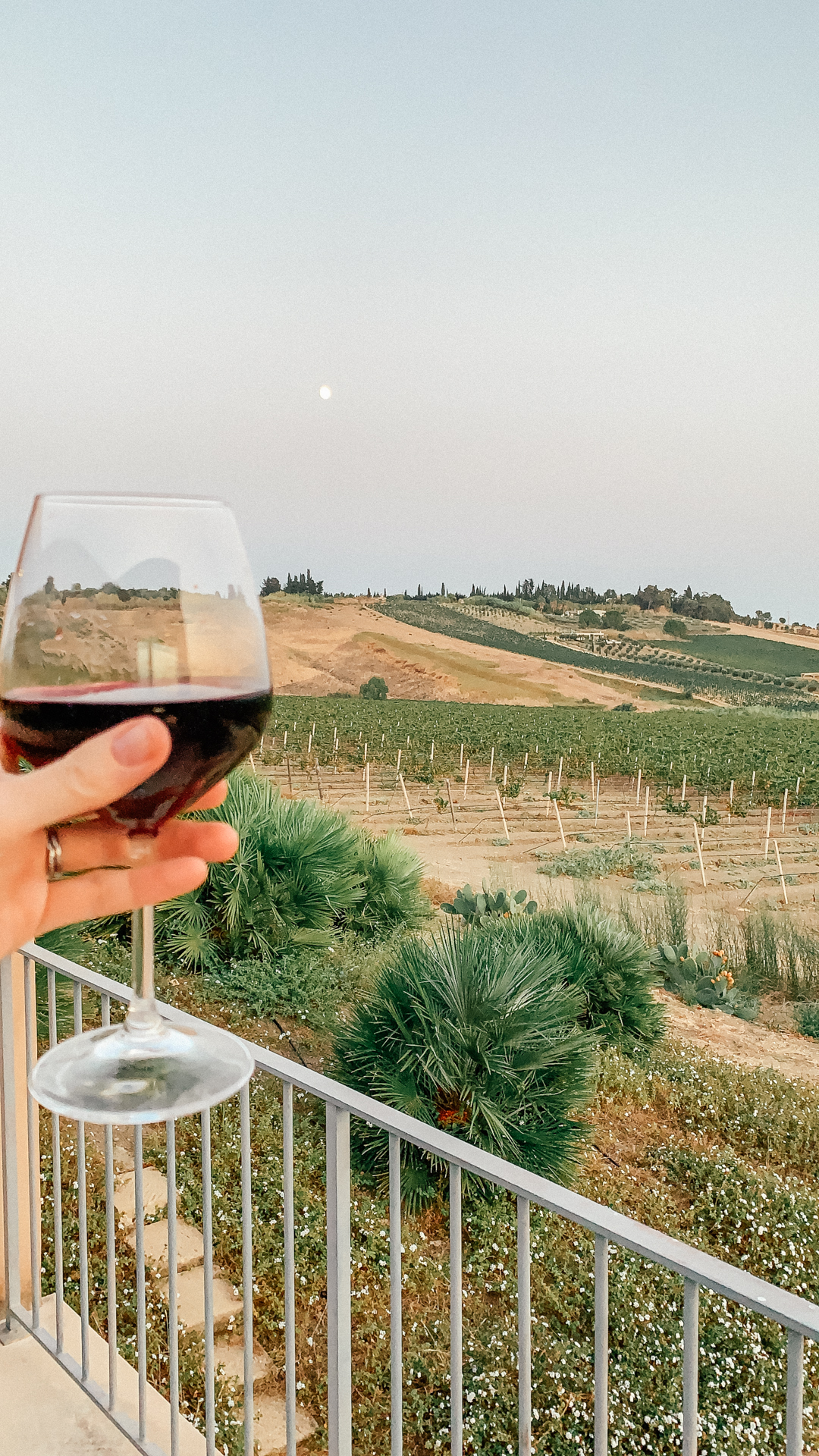